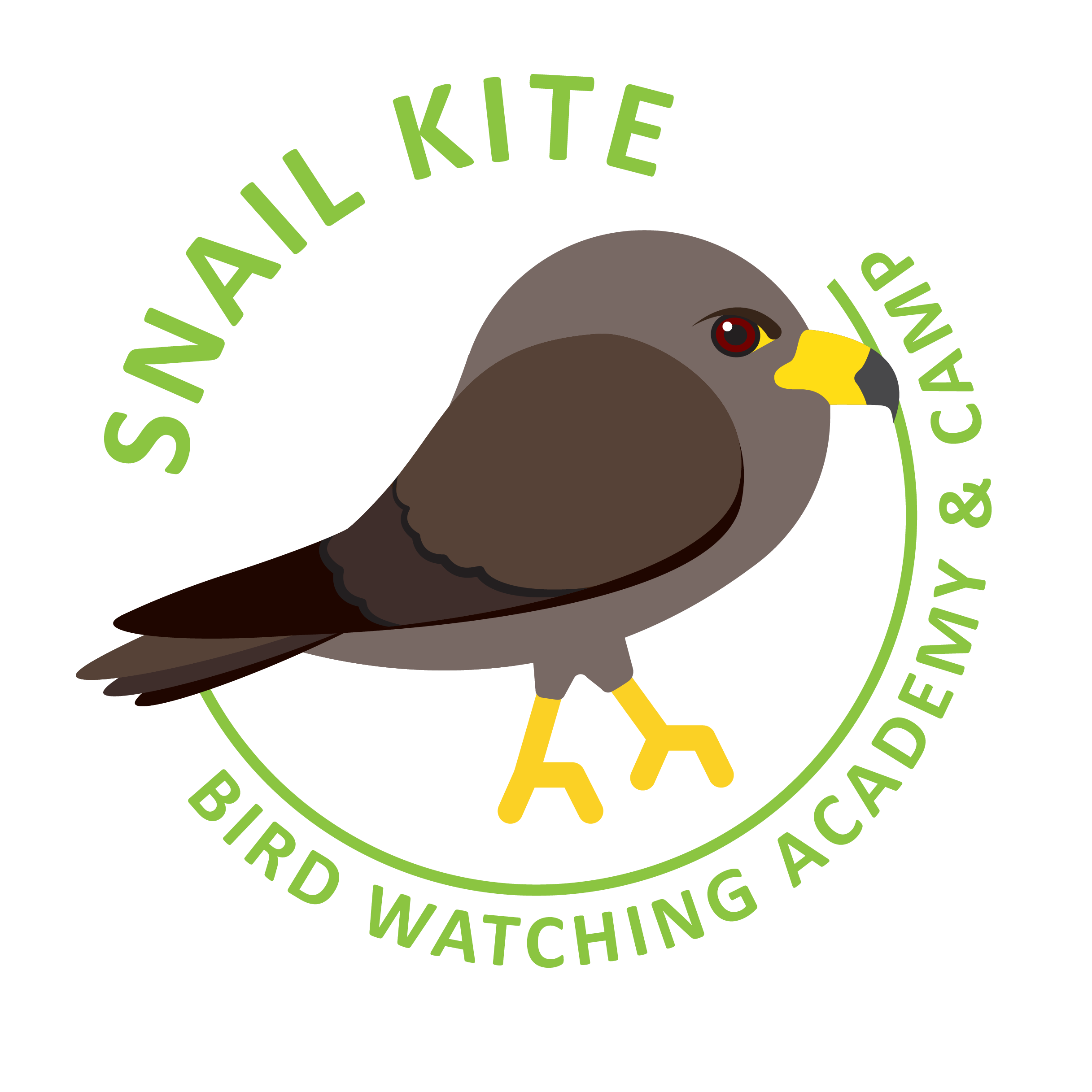 A Snail Kite is a fun bird to see while bird watching. Below are some tips to help you identify Snail Kites. We have also put together a list of fun Snail Kite t-shirts, Snail Kite bird patches, birdhouses, bird feeders, binoculars, stickers, and other fun bird watching items.

The Snail Kite is a bird of prey that is all around residents of the southern regions of North America but predominant in northern South America. They only make it to the United States in southern Florida. Their name has been derived from the fact that they love feeding on snails. The Snail Kite belongs to the family Accipitridae which also includes, eagles, hawks, and old-world vultures. Numbers in Florida are dropping attributed to the loss of water which is essential for snail habitats in the region.

Snail Kites are medium-sized raptors that are 14-19 inches long, with a wingspan of 39-47
inches. These birds weigh from 11-20 oz. Although these birds display sexual dimorphism with
females being larger than males, the difference is negligible. Snail Kites have broad, long, and
rounded wings that enable them to be the specialized hunters they are. Male Snail Kites have a
dark blue-gray plumage with flight feathers darker than the rest of the body. In contrast, females
have dark brown upper bodies and lower bodies that are streaked pale. The legs and ceres of the
females are orange or yellow, and the legs and ceres of the males are red. The only noticeable
difference between females and juveniles is that the younglings have streaked crowns.

Adult males have a bluish-gray plumage and darker flight feathers. Their legs and cere are red while the bill-end are black. The female has dark brown upper parts streaked with pale underparts. She has a whitish face and darker shades above and behind the eye.

The Snail Kite tends to fly slow with their heads facing downwards while searching for the large apple snails, a fact that makes them be considered as molluscivorous birds. Sometimes it would perch low to scan the surrounding for snails.

Once it gets the snail, it would perch on nearby branches and use one leg to hold down the snail and the upper mandibles of its beak to pry the snail out of its shell.

The favorite and most common part of the diet of these birds are freshwater apple snails. Spike-
topped snails, island apple snails, and Florida apple snails are some of the snails these birds eat.
Snail Kites have earned their name due to their particular liking for snails. These birds are known to
forage for snails in flight, as well as while being perched atop branches of various trees. Snail Kites
hunt snails by locating and seizing them by the talons and extracting the snails with their bills
afterward. These birds have been observed to steal snails from other birds such as Limpkins.
Under rare circumstances, these birds also include crayfish, turtles, small crabs, and snakes into
their diet.

As stated above, the Snail Kite mainly feeds on apple snails but during droughts when the snails are scarce, they will feed on small turtles. They rarely feed on rodents and crabs.

Snail Kites usually inhabit wet prairies, sloughs, retention ponds, lakes, and freshwater marshes.
These birds seek regions with sufficient aquatic vegetation that supports snails which are their
primary prey. If the vegetation is too dense, these habitats may be abandoned as it becomes
difficult for Snail Kites to spot snails. Although these birds are mostly permanent residents, they
might migrate away from their habitats if a drought occurs.

Given the kind of food they like to eat, the Snail Kite will habit fresh marsh and canals found in Florida. They favor shallow waters with sawgrass.

Snail Kites are one of the most specialized birds of prey that are mostly found in South America
and have a narrow range in North America. These birds typically breed in the Caribbean, tropical
South America, and in the central and southern parts of Florida. Through the majority of their
range, these birds are permanent residents. Snail Kites that breed in the southernmost portion of
their range migrate northwards during winter, and the Snail Kites that reside in the Caribbean spread
out of their breeding range outside the breeding season.

The female used to lay larger clutches like 5-6 eggs but the number reduced due to less food supply. They now lay 2-3 eggs which they incubate for 26-28 days. The young are fed by both parents for 3-6 weeks then one parent departs to look for a mate. At 9-11 weeks, the young take their first flight. The Snail Kite has a lifespan of 9.5 years.

Snail Kites have been observed to nest in loose colonies. To court the females, the males fly high
up and dive repeatedly near the females. Their courtship flight is especially fast and exaggerated.
Sometimes, males might also feed snails to females during courtship. Male Snail Kites choose
nesting sites in trees alongside shallow waterbodies. The sites chosen are also close to their
hunting grounds. Snail Kites prefer small trees, and sometimes they also nest in the shrubbery. Male
Snail Kites assume the responsibility of constructing the nest, but the females maintain it. Females
lay from 1-5 eggs annually, which need to be incubated for 24-30 days. Nestlings stay in the nest
for 26-30 days, after which they can fly away.

The Snail Kite is a great iron-on patch to start your collection with. The patches are durable and can be sewn on or ironed on to just about anything.

Stickers are a great way for you to display your love for bird watching and the Snail Kite. We sell a monthly subscription sticker pack. The sticker packs have 12 bird stickers. These sticker packs will help your kids learn new birds every month.