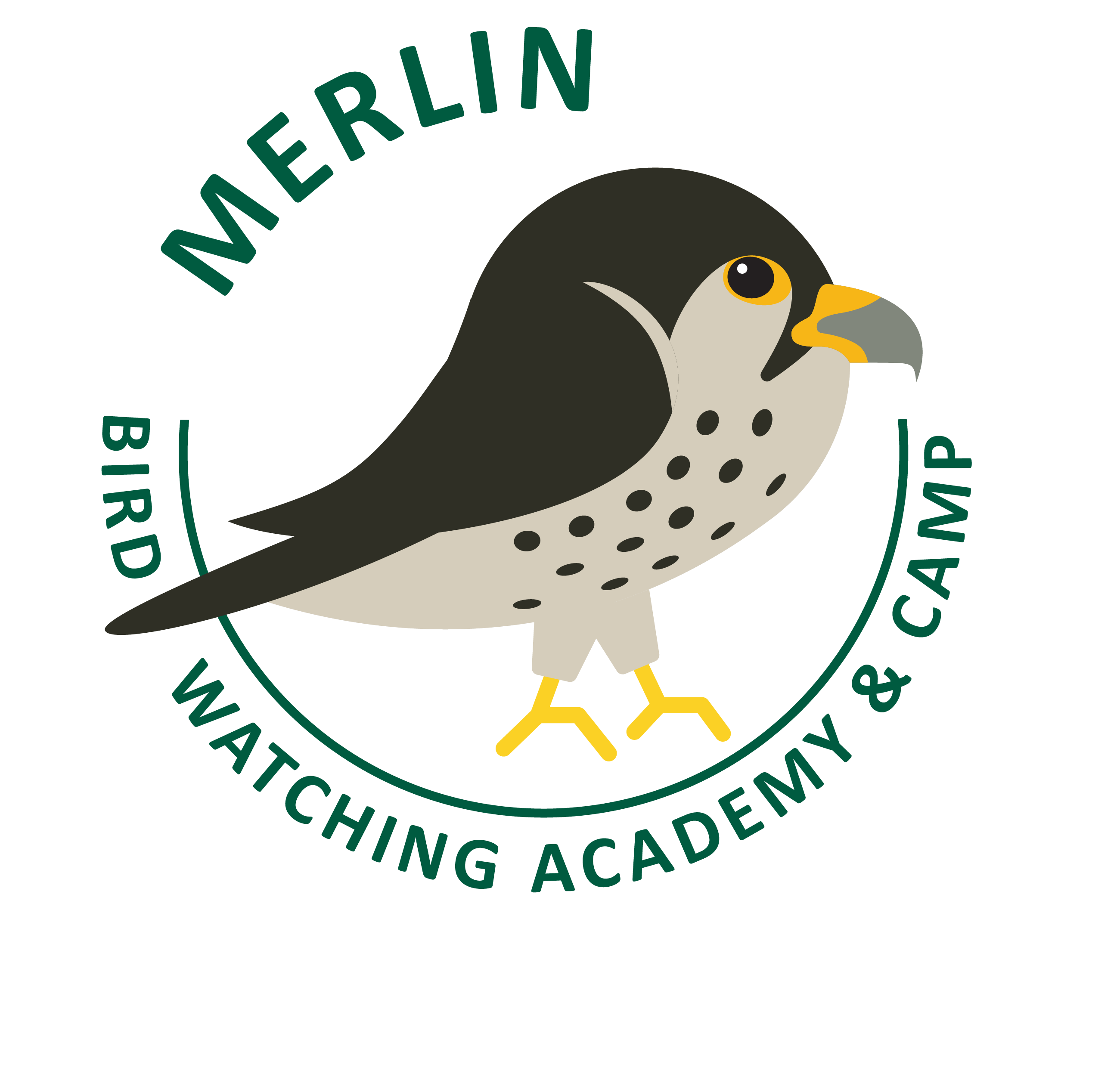 A Merlin is a fun bird to see while bird watching. Below are some tips to help you identify Merlins. We have also put together a list of fun Merlin t-shirts, Merlin bird patches, birdhouses, bird feeders, binoculars, stickers, and other fun bird-watching items.

The Merlin is a fairly small bird belonging to the Falcon family and native to North America. They can also be found in Europe and Asia as they are migratory birds. The numbers of the Merlin bird have increased in some parts of North America especially in the northern plains. They have also expanded their nesting grounds to towns and suburbs hence the numbers are stable and growing thanks to the ban of DDT pesticide.

Merlins might be smaller than most falcons at 9.4 – 11.8 inches in length, but their stocky
and powerful builds make them formidable birds of prey. They have sharply pointed wings, a
broad chest, and a medium-length tail. As with most falcons, the females are generally
slightly larger than the males. Merlins are typically dark and streaky, but their coloration
varies by geography and gender. Males are usually slaty gray to dark gray with females and
immatures being browner. The breasts are usually heavily streaked, and their underwings
are dark. Their dark tails have narrow white bands and their faces lack a prominent
“mustache” stripe.

Males have a blue-gray back but may range from black to silver-gray depending on the subspecies. Its underparts range from orange tints to buff also depending on the subspecies. These underpart shades are coupled with reddish-brown to black streaks. Females are brownish-gray to dark brown on their upperparts. Their underparts are a whitish buff spotted with some brown streaks.

They are fairly small birds especially for the Falcon family as their length is 24-33cm and a wingspan of 50-73sm. They weigh an average of 230g.

They are considered fierce hunters attributed to their element of surprise. They take on a flight speed of about 30 miles per hour and can go faster when going for prey. They exhibit a more powerful flight and can flap their wings faster than the Prairie and Peregrine falcons.

The Merlin gives out remarkable displays, especially during courtship. This includes bursts of strong level flights while rocking from one side to the other. They then take deep U-Shaped dives, take on a slower fluttering flight in a circular or figure-eight pattern near their perched mate.

Merlins are birds of prey that mostly consume small to medium-sized birds between 1 – 3 ounces. Their most common prey includes Horned Lark, House Sparrow, Bohemian Waxwing, Dickcissel, Least Sandpiper, Dunlin, and other songbirds and shorebirds. They attack at high speeds from any direction in order to catch their prey by surprise, often working in pairs for an efficient hunt. Their other prey includes large insects like dragonflies, bats at cave openings, nestling birds, and small mammals.

Merlins’ main diet is small birds which they are able to catch mid-air like other types of birds in the Falcon family. They also eat large insects such as dragonflies as well as bats.

Merlins can be found breeding in open and semi-open areas across northern North America.
They are found in a variety of habitats, with each hosting a different sub-species of these
falcons. The boreal subspecies can be found nesting near forest openings, in fragmented
woodlots, near rivers, lakes, bogs, and on lake islands. On the other hand, the Pacific
Northwest subspecies can be found nesting in coastal areas along rivers. Prairie subspecies
nest in shrubs and trees along rivers and in small groves of deciduous trees. They winter in
similar habitats across the United States, with their range extending as far as Ecuador. In recent years, Merlins have been observed to increasingly breed in urban areas, often taking
over crow nests in residential areas, schoolyards, parks, and cemeteries.

They can be found in open conifer woodlands and prairie groves. During migration, bird watchers can spot them among the foothills, marshes, and open countries.

Merlins are small falcons that are widespread throughout North America. These birds of prey
were once known as pigeon hawks colloquially before the adaptation of their current name.
They are classified as long-distance migrants. They are found breeding in most of the
northern Holarctic, with American populations found throughout Alaska and Canada. As
winter approaches, they migrate south towards central and eastern United States. Wintering
populations can be found throughout the Atlantic coast of North America, along the Pacific
coasts of the United States, Caribbean, Mexico, and Central America, and within the inland
regions of the United States and many countries southwards. Some populations in the north-
the western United States, southwestern Canada, and the Pacific coasts of Canada are
permanent residents of their breeding grounds and do not migrate.

The Merlin has a lifespan of 7-10 years depending on whether they are in the wild or in captivity. The female can lay up to 5 eggs. They incubate the eggs for 28-32 days before the young hatch. A month after the young have hatched, they take their first flight.

These falcons nest in the abandoned nests of crows, magpies, ravens, and hawks in either
coniferous or deciduous trees of semi-open habitats. While the type of tree the nests are
situated in varies based on the region, most prefer nests that are situated at high elevations
and provide good views of the surrounding areas. On rare occasions, they can be found
nesting in tree cavities, on cliffs, or even on the ground. These birds almost never reuse
nests and maintain no consistency on the dimensions of the nests that they select, as it
depends entirely on which species’ nests they use.

The Merlin is a great iron-on patch to start your collection with. The patches are durable and can be sewn on or ironed on to just about anything.

Stickers are a great way for you to display your love for bird watching and the Merlin. We sell a monthly subscription sticker pack. The sticker packs have 12 bird stickers. These sticker packs will help your kids learn new birds every month.