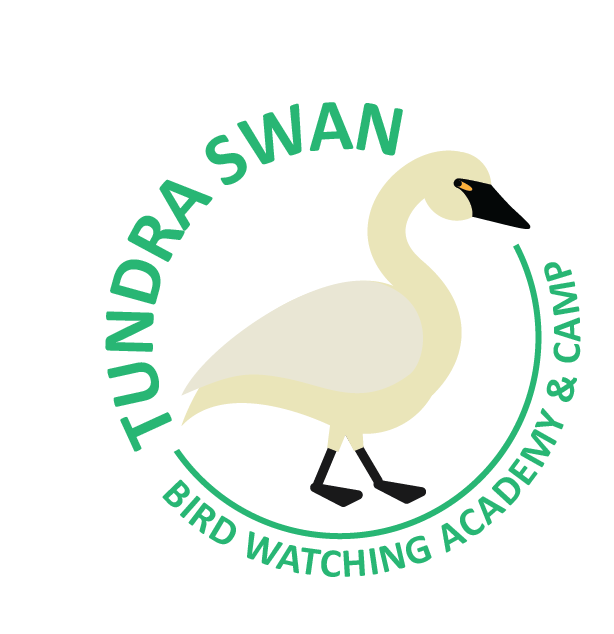 A Tundra Swan is a fun bird to see while bird watching. Below are some tips to help you identify Tundra Swans. We have also put together a list of fun Tundra Swan t-shirts, Tundra Swan bird patches, birdhouses, bird feeders, binoculars, stickers, and other fun bird-watching items.

These elegant creatures have a distinctive whistling in their wings which led to their colloquial name “whistling swans.” Unlike their relatives the trumpeter swans, civilization did not affect their population. Instead, they adapted by shifting their feeding grounds to waste agricultural lands. They frequent the United States only in winter and during migration. Some of their distinctive features include:

Tundra Swans are large waterfowls that are around 47.2 – 57.9 inches in length, with a
wingspan of roughly 66 inches. They have the heavy bodies and long necks that are
characteristic of swans, and their bills gently slope away from their heads. Male swans tend
to be slightly larger and heavier than females. Their plumage is entirely white, and their
bills are a contrasting black with a yellow spot at the base; their legs and feet are black as
well. Immatures have similar plumes but are gray-tipped on the wings, head, and neck.

The Tundra Swans are primarily white with a black bill that has a yellow spot near the base. Their legs and feet are also black. However, immature birds have gray traces on their head, wings, and neck.

They are large and bulky birds that have long necks. Their heavy bill is gently sloping from the base. Even though larger than a snow goose, they are dwarfed by trumpeter swan.

They forage by dabbling on water and often in large flocks. During a flight, their long neck is usually outstretched but when on land or water, the neck is held in an upright position. They can also forage by dipping their head underwater. During migration, Tundra Swans mostly feed on land.

These birds primarily feed on plant matter like tubers, stems, and leaves of aquatic
vegetation like Carex sedges, saltmarsh starwort, alkali grass, pondweed, and Nostoc algae.
During migration season and on their wintering grounds, they mainly feed on harvested and
growing agricultural crops like corn, soybeans, rice, winter, rye, and barley. They may be
found foraging on shallow water like ducks or grazing in meadows. They also consume
mollusks and anthropods, presumably mainly during the breeding seasons.

Their diet mostly comprises seeds plus other plant material. During summer, they feed heavily on seeds, stems, and roots of plants such as pondweeds, sedges, arrowleaf, etc. during other seasons, they feed mostly on waste grains such as soybeans.

These swans can be found breeding on wetlands situated by the tundra regions of the Arctic.
They are most abundant in lakes, ponds, and pools situated along river deltas, but some
birds can be found at inland sites below the treeline as well. These birds are drawn towards
extensive wetlands and lakes with long shorelines that support pondweed. Migration season
commences with flocks gathering at the brackish shorelines of river deltas to begin traveling
south, with flocks often stopping at wetlands in boreal forests on the way. Wintering
populations inhabit estuaries, lakes, bays, ponds, rivers, and other water bodies that are
usually located close to agricultural fields.

They breed on pools, ponds, and lakes mostly in Alaska and Canada. They prefer extensive wetlands and lakes with extensive shorelines where pondweeds can thrive. During winter, flocks are a common sight near lakes, rivers, and ponds near agricultural fields.

Tundra Swans are some of North America’s most numerous swans and can be found
breeding along the Arctic and subarctic tundra in both Eurasia and North America. Their
range throughout the old and the new world is extensive, and they have subsequently left a
literary mark on many cultures historically. Their North America range begins from their
breeding grounds along the coastal plains of Alaska and Canada before they move along
the Pacific coast towards California for the winter. Flocks that move inland can be found
crossing the Rocky Mountains to arrive at locations as far east as Utah and as south as
Texas and northern Mexico. The birds that breed along the Arctic coast migrate through
inland Canada and the Great Lakes areas to arrive at the Atlantic coast of the United States,
stretching from Maryland to Florida. They are medium-distance migrants, but vagrants have
been recorded as far as England, Japan, and Siberia.

While details about who selects the nest site are largely unknown, the nests are generally
placed on the ground near a large body of water on an inland, or in upland or wet meadow
tundra. These swans also often nest on low, elevated ridges between small ponds that are
created by the repeated thawing and freezing of the soil. The nests are constructed by both
members of the pair and consist of a mound of plant material like grasses, sedges, lichens,
and moss. Females create a cup-shaped bowl into the mound and both members begin to
deepen the bowls. As egg-laying begins, they continue to work on the nest to ensure
sufficient insulation.

The Tundra Swan is a great iron-on patch to start your collection with. The patches are durable and can be sewn on or ironed on to just about anything.

Stickers are a great way for you to display your love for bird watching and the Tundra Swan. We sell a monthly subscription sticker pack. The sticker packs have 12 bird stickers. These sticker packs will help your kids learn new birds every month.