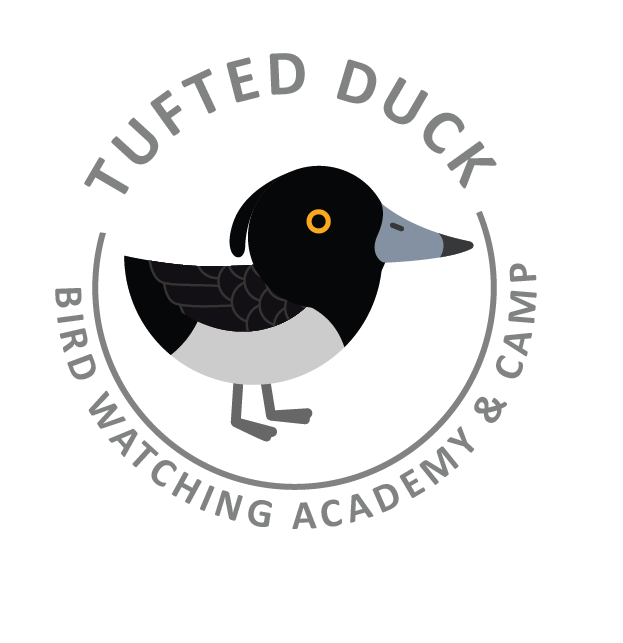 A Tufted Duck is a fun bird to see while bird watching. Below are some tips to help you identify Tufted Ducks. We have also put together a list of fun Tufted Duck t-shirts, Tufted Duck bird patches, birdhouses, bird feeders, binoculars, stickers, and other fun bird-watching items.

These common diving ducks are localized in western Alaska and wander towards North America. They are common along the Pacific Coast from Europe, through Iceland to Asia. They are related to the North American Ring-necked Duck. Some of their distinctive features include:

Tufted Ducks clearly display sexual dimorphism as the males are significantly larger than females.
These diving ducks are 17 inches long, with a wingspan of 7.6-8.3 inches. The tuft present at the
back of their neck distinguishes them from ducks from the species of their relatives. Males have
noticeable black tufts, and females have brown tufts that are less prominent. Male Tufted Ducks
are predominantly black with white flanks and underbellies. Their eyes and bright yellow, and their
tufts are often matted down because of diving. Female Tufted Ducks have predominantly brown
plumage, white underbellies, and dark yellow sides. Juveniles are similar in appearance to the
females, but their coloration is paler and their tufts are less defined. Male Tufted Ducks in non-
breeding plumage also looks similar to females.

The male Tufted Ducks are entirely black with white sides. The head, breast, and neck are also black. Their eyes are yellow-orange. The females are entirely dark brown with lighter flanks and their bills are blue-gray.

Tufted Ducks are medium-sized diving ducks that are dwarfed by a mallard. They have a long, chunky bill.

From June to September, the males remain inactive and avoid flying as they molt. They molt in groups during the incubation period. Even though habitually quiet, they make calls during the breeding season whereby the female calls are much louder than the male calls. They breed alongside birds such as gulls.

Tufted Ducks are omnivorous ducks that mainly feed on mollusks. Zebra mussels are the mollusks
most frequently consumed by them. These ducks also feed on a variety of plant materials such as
stems, roots, and leaves, and a few seeds. Tufted Ducks are known to forage in flocks. These
diving ducks can be submerged in water for up to 1 minute. Tufted Ducks have also been observed
to bring large plants and vertebrates to the ground before consuming them.

They forage by diving and swimming underwater to hunt for prey on or near the bottom. They feed heavily on mollusks, aquatic insects, and plants and sometimes feed at night. They diversify their diet by feeding on snails, small fish, and other aquatic creatures.

As Tufted Ducks are migratory birds, their habitat changes seasonally. During the breeding season,
these birds prefer to inhabit shallow waterbodies that are no deeper than 50 feet. These
water bodies also need to support the growth of thick vegetation to be suitable habitats for these
ducks. Tufted Ducks not only need dense vegetation for feeding, but they also need it to protect
themselves from strong winds. Tufted Ducks winter in larger water bodies such as man-made
ponds, estuaries, lakes, and marshes. While migrating Tufted Ducks can also be spotted in rivers.

Tufted Ducks rarely breed in winter and can be found in inland water bodies, estuaries, and tidal bays since they refrain from high tides. They breed on areas around lakes, preferably shallow islands. During this season they frequent ponds, reservoirs, and other open freshwater bodies.

Tufted Ducks are small diving ducks that have an extensive range that begins in Eurasia and Africa
and extends to the coasts of North America. In the past, Tufted Ducks could only be found in the
In the Palearctic region, but over time their range has extended due to the increased availability of
shallow waterbodies. These birds have significantly benefited from man-made changes to their
habitats. Shallow water bodies constructed by humans are ideal habitats for feeding. Regions such
as Europe, Asia, eastern Siberia, Norway, the Faroe Islands, and the British Isles are inhabited by
Tufted Ducks during the breeding season. In winters, these ducks can be found in northern Africa,
southern Asia, southern Europe, and certain regions in North America.

The females lay 9-10 eggs and incubate them for about 25days. Hatchlings leave the nest shortly after hatching and are led to water by the female. They fledge after 45-50 days. Their average lifespan is 4 years in the wild.

Tufted Ducks are seasonally monogamous birds that raise one brood annually. These ducks form
pair bonds during spring migration before they reach the breeding grounds. Courtship displays
performed by these ducks are similar to those of other diving ducks. These ducks breed between
May and August, and the pairs stay together till the end of July. Females lay about 6-14 eggs that
need to be incubated for a period of 26-27 days. On average, nestlings require 43 days of parental
care before they can sustain independently.

The Tufted Duck is a great iron-on patch to start your collection with. The patches are durable and can be sewn on or ironed on to just about anything.

Stickers are a great way for you to display your love for bird watching and the Tufted Duck. We sell a monthly subscription sticker pack. The sticker packs have 12 bird stickers. These sticker packs will help your kids learn new birds every month.