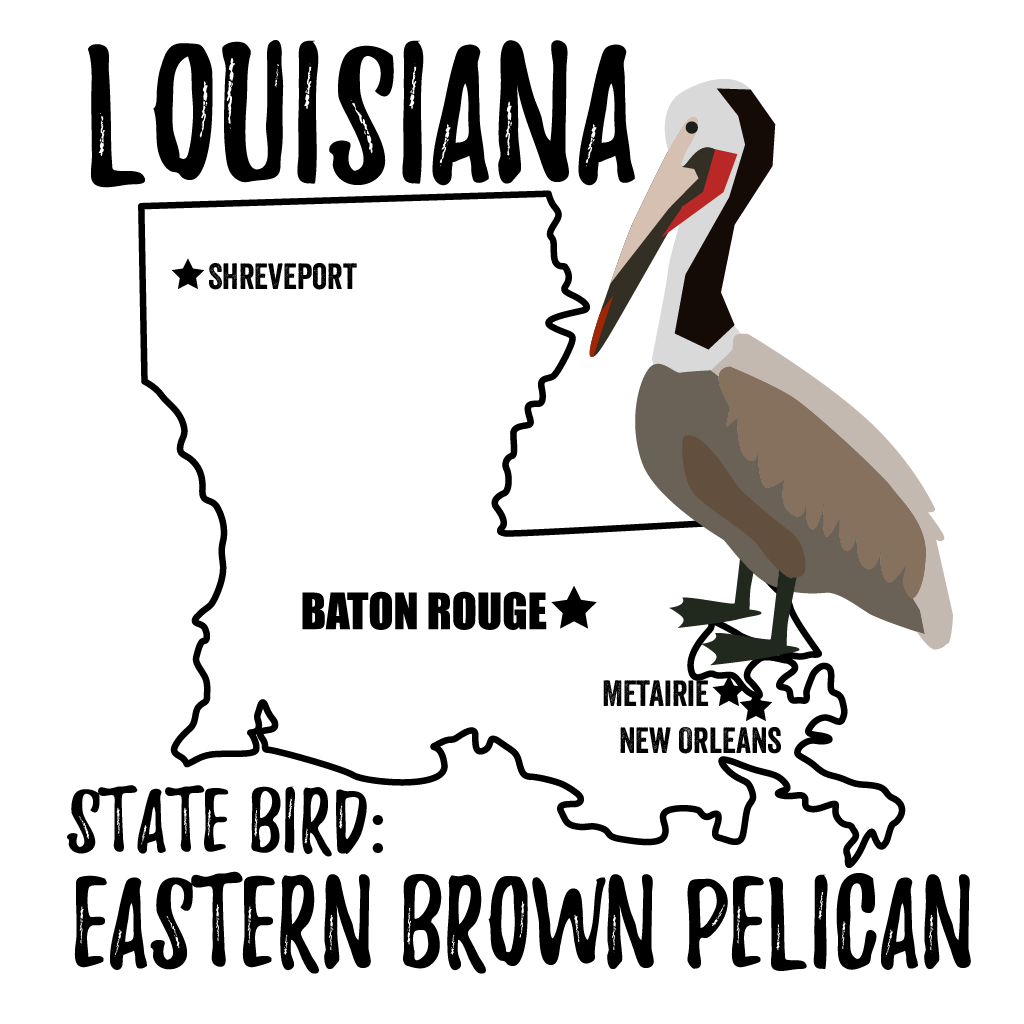 Louisiana has Baton Rouge as its capital city. The state itself got admission into statehood in the year 1812 on April 30. It was one of the earliest states to do so, becoming the 18th one. As for its nickname, did you know Louisiana is also known as Pelican state? The state bird of Louisiana has a deep connection to the nickname!

What is the State Bird of Louisiana?

The Louisiana official state bird’s position belongs to the majestic Brown Pelican. It has been this way since 1966. This is because the early European settlers found it particularly fascinating how nurturing and kind Brown Pelicans are towards their young.

Brown Pelicans have a brownish-gray plumage, a white neck and top of the head, and a black mask around the face. They all possess a long, brown beak. It’s particularly sharp-looking. They also have curious, button-shaped, intelligent eyes.

What Makes the State Bird of Louisiana Unusual?

Isn’t the appearance of the Brown Pelican the most unusual thing about them? They are with an almost comical level of elegance. They have a large body, an extremely long bill and an equally long neck. The sight of a Brown Pelican is fascinating as it can strike fear in your heart due to their intelligent and sharp eyes.

They are called brown Pelicans mostly because of the deep shade of brown in their neck. Overall, the brown mixed with black and white colors in their body and the dash of orange in the tip of their bill all contribute to making the Brown Pelican a peculiar sight.

Let’s learn even more about the Louisiana official state bird!

1. After the Brown Pelican has taken a dive and is trying to drink water with their bill, this is when gulls flock around them to steal the fish the Pelicans have in their pouch. Sometimes, they even sit right on the Brown Pelican’s head to do so. Pelicans aren’t the most innocent birds either. They steal fishes, too, especially from fishing boats and piers, to catch one of the fishes already taken out of water and run away.

2. To incubate the eggs, Brown Pelicans cover them with their feet. In other words, they pretty much stand over the eggs to incubate them. At one point in the mid twentieth century, due to certain pesticides, Brown Pelicans were laying thin eggs. These eggs would crack under the weight of their parents while incubating. As a result, Pelicans almost went extinct and were saved from being endangered as pesticides began to be regulated properly.

3. When diving, the Brown Pelicans tuck their heads. They also do a left side rotation.

The Brown Pelican might not be the most common sight in Louisiana, but its presence can certainly be felt in the state. The official state bird is important enough to actually have become the state’s most prominent characteristic for outsiders. Who wouldn’t want to see this royal bird species at least once?