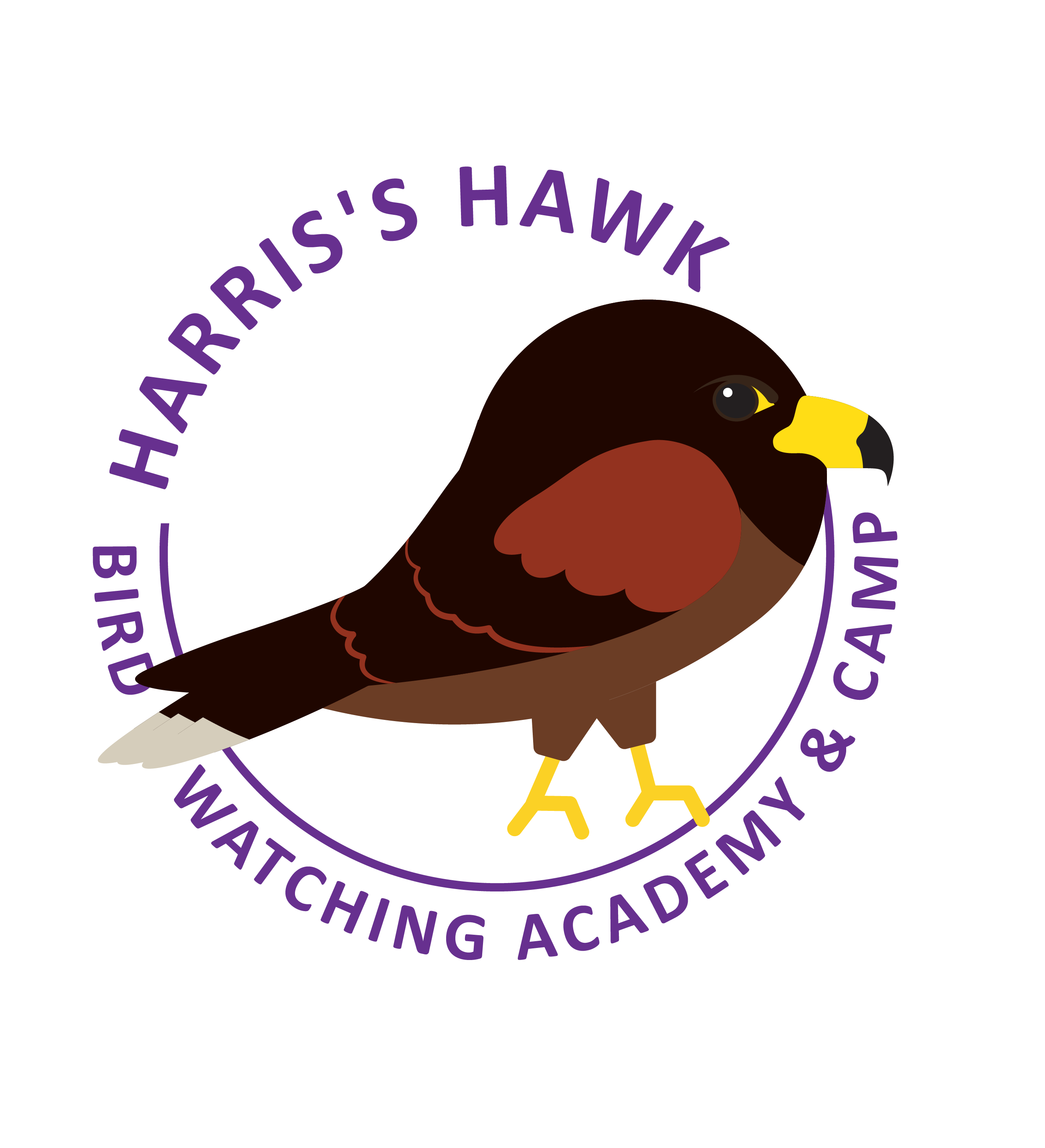 A Harris’s Hawk is a fun bird to see while bird watching. Below are some tips to help you identify Harris’s Hawks. We have also put together a list of fun Harris’s Hawk t-shirts, Harris’s Hawk bird patches, birdhouses, bird feeders, binoculars, stickers, and other fun bird-watching items.

The Harris’s Hawk was formerly called the dusky hawk or bay-winged hawk. It is a bird of prey native to North America. They breed in the southwestern region of North America, south to Chile, Brazil, and central Argentina. The Harris’s Hawk can also be seen in Western Europe especially in Britain. The bird was dominant in the lower Colorado River Valley but has since disappeared though efforts have been put in place to restore the species. The decline is attributed to falconry, which leads to the birds being captured.

Harris’s Hawks are large and chunky raptors at about 18.1 – 23.2 inches. They have long
legs with broad, rounded wings that have a span of 40.5 – 46.9 inches. Their tails are also
quite long. Like most falcons, the females are larger than the males and nearly weigh twice
as much. Harris’s Hawks are dark brown overall with reddish-brown feathers on the wings
and thighs. Their tails are dark with a white rump and terminal band. The inner portions of
their wings are also reddish-brown. Juveniles have white patches on their belly and wings,
with narrow white bands across the bottom of their tail.

They have a chestnut shade on their wing shoulder, wing linings, and thighs. Their plumage is dark brown while the base and tip of the tail are white. They have long yellow legs and cere that join the silver-gray beak.

The bird can be seen in relatively stable groups which practice a dominance hierarchy. At the top of the hierarchy is the female hawk then followed by the male. The young of the previous year’s then follow. Their groups range from 2 to 7 birds.

Their sense of community is exhibited when they are hunting together or assisting in the nesting process. They are unique from other types of birds in the sense that they routinely hunt together.

The hawk displays its aggression by holding its body level to the ground, raising the feathers on its head, neck, back, and drooping its wings. When hunting, they could go to the ground, run and jump to catch prey.

Harris’s Hawks mainly feed on small and medium-sized mammals like hares, rabbits, ground
squirrels, and other rodents. They also consume quails, woodpeckers, chickens, and
medium-sized reptiles like lizards. When food sources are scarce, they may also consume a
variety of insects. In extremely rare circumstances, Harris’s Hawks have been observed to
defend corpses of larger animals against scavengers in order to secure the prey for
themselves.

These birds are mainly found in semi-open desert lowlands and in some savannah and
wetland habitats. They are particularly found around trees of mesquite, saguaro, and organ
pipe cactus. Their territories include high perches of trees, boulders, and power poles. These
spots are generally used as lookouts, feeding areas, and nesting. Most of the time, areas
with water sources like springs and water catchments in proximity are chosen by the birds to
nest in. As urban development has increased, Harris’s Hawk populations around groves
have increased in urban and suburban areas significantly.

They can be found in river woods, brush, cactus deserts, and open dry country. These include the mesquite brushland of Texas, the cactus Arizona desert, and New Mexico.

Harris’s Hawks are large birds of prey that are found from the southwestern United States to
Chile and Argentina in South America. These birds are permanent residents of their native
regions and are found in arid areas of southern North America and northern South America.
Although there is no definite migratory pattern, flocks and individuals may travel during times
of prey shortages. These birds of prey have been known for their intelligence and have been
considered to be easy to train in falconry for centuries.

Females lay 3-4 eggs which are incubated for 33-36 days when the young hatch. Young ones move out to nearby trees 40 days after they hatch. They have a lifespan of 12 years when in the wild.

Nests are generally located at sites well above the grounds. They are usually any relatively
tall and sturdy structures in tall sites like saguaro cactus, mesquite trees, palms, eucalyptus, pine, and cliffs. In urban areas, these sites may also be found in artificial structures like
electrical transmission towers, weather antenna, windmill platforms, and artificial nesting
platforms. The structure of the nest is made up of sticks and parts of the cactus, which is then
further lined with grass and down feathers to provide for the interior cup. While both
members of the pair contribute to the construction of the nest, females do a majority of the
work. These birds are unique in the fact that they may make more than one nest during a
breeding season, often turning the unused site into a feeding station. These elliptical nests
can host between 1 – 5 eggs in a single clutch.

The Harris’s Hawk is a great iron-on patch to start your collection with. The patches are durable and can be sewn on or ironed on to just about anything.

Stickers are a great way for you to display your love for bird watching and the Harris’s Hawk. We sell a monthly subscription sticker pack. The sticker packs have 12 bird stickers. These sticker packs will help your kids learn new birds every month.