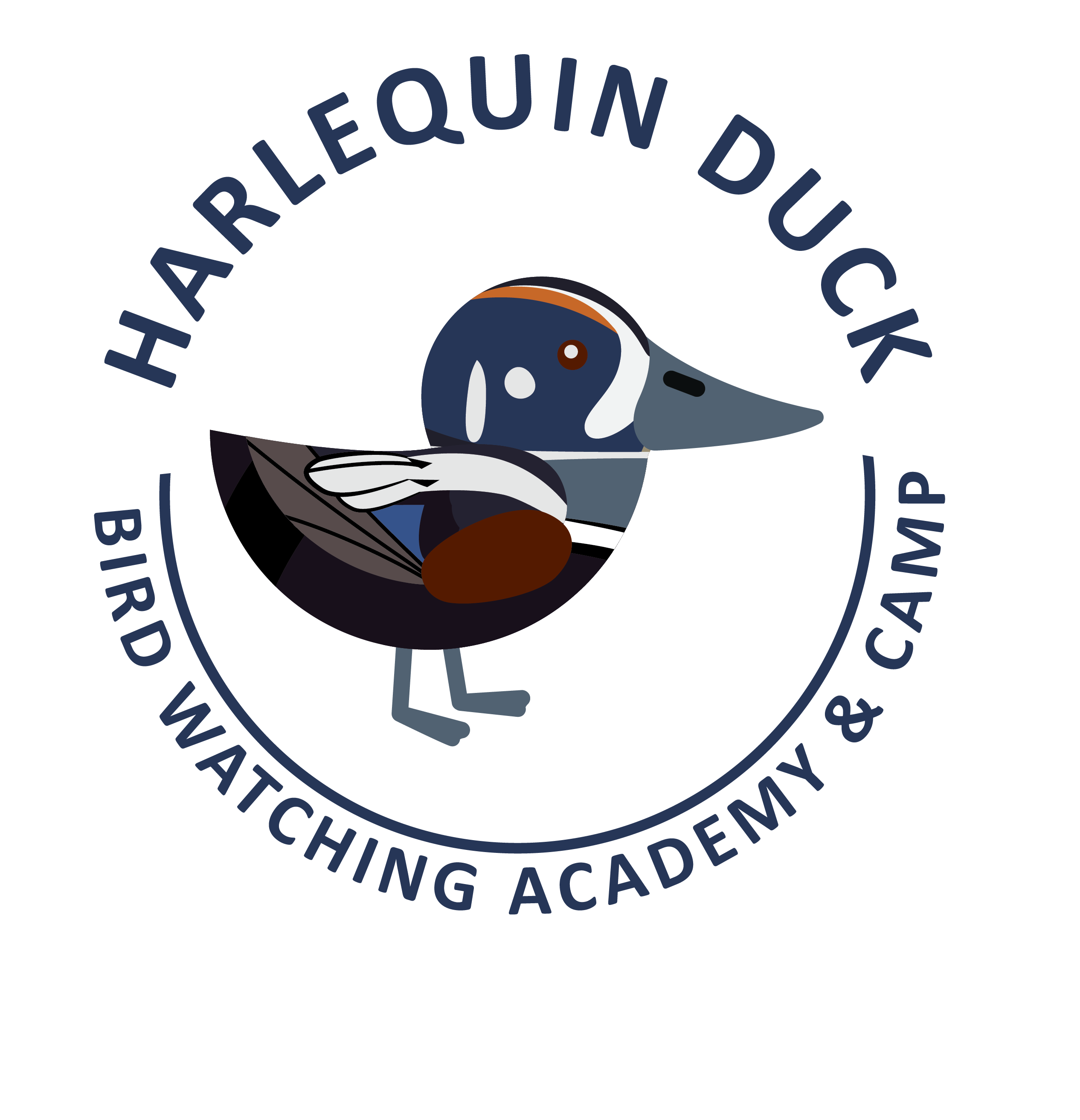 A Harlequin Duck is a fun bird to see while bird watching. Below are some tips to help you identify Harlequin Ducks. We have also put together a list of fun Harlequin Duck t-shirts, Harlequin Duck bird patches, birdhouses, bird feeders, binoculars, stickers, and other fun bird-watching items.

The Harlequin Duck (Histrionicus Histrionicus) is a small sea diving duck that is found in North America.

Harlequin Ducks derive their namesake from the extravagantly colored markings on their
bodies. These small and compact waterfowls are around 13.4 – 18 inches long. They have
large, rounded heads with a steep forehead and a small bill. Their wingspan is approximately
22 – 26 inches. Breeding males are a vibrant slate blue with white stripes and chestnut-colored sides. They have a white crescent that marks their head in front of the eye, with
chestnut highlights lining the brow. Females have grayish-brown bodies with white around
their bill and eyes.

The Harlequin Duck has a gray bill and distinct white spots across the sides of its face. The male duck’s plumage is a slate-gray color that contrasts their rusty-red sides. On its chest, neck, and wings it has white streaks. The female has a brownish-gray plumage and a pale cream belly with brown spots.

The relative size for both sexes is:

Their primary diet mostly consists of aquatic invertebrates and other small fish. They
generally catch their prey by swimming underwater or diving but also dabble. Their prey
includes mollusks, crustaceans, fish eggs, and aquatic insects like midges. During the
winters, their range of prey broadens to include marine invertebrates as well. These include
crustaceans like crabs, amphipods, barnacles, mussels, limpets, periwinkles, snails, and
insects.

Being a diving duck, the Harlequin Duck dives deep into the bottom of the rivers, streams, shallow coastal waters they inhabit. They use the hooks at the edges of its bill to scrape their prey out of rocky crevices.

Over summer, they forage on both river and stream beds for the larvae of flying insects muck like the blackflies. In winter, their diet mostly consists of periwinkles, shrimps, mussels, and some fish eggs.

These ducks are primarily found in subalpine and coastal habitats. During the early breeding
season, they are common in sections of rivers with rapid flows, but they move on to slower-
moving stretches of rivers and lakes once the chicks hatch. Rivers and streams with small
islands and sandbars are where they usually rest. Winter migrations take them towards the
rocky coastal shorelines of the Atlantic and Pacific coasts, where they can be found resting
on boulders or near cobble beaches.

During the winter season, these ducks are found in regions with rocky coastal waters. On the other hand, during their breeding season, they inhabit fast-flowing mountain streams.

Harlequin Ducks are sea ducks that are found along cold, fast streams across North
America. They are short-distance migrants and tend to stay in the same vicinities as their
breeding areas. The birds that breed in Alaska and north-western Canada and the United
States migrate to the northern Pacific Coast. Similarly, birds that breed in Greenland and
north-eastern Canada migrate towards the Atlantic coasts of Canada, the United States, and
occasionally England. The increased undertaking of hydroelectric projects has led to drastic
declines in the population of the species, classifying them as an endangered species.

In late March, the Harlequin Duck leaves its wintering grounds and makes its way towards inland areas over the summer for the breeding season. Once they find their pate, they mate in pairs for over a year. The female will choose the nesting site and then lay 3 to 10 cream or pale buff eggs.  As the female begins incubating the eggs for a period of about 28 to 29 days, the male Harlequin Duck leaves her in the nest.  A day or two after the eggs hatch, the female duck leads the ducklings to the water. They then begin to fend for themselves at the age of 40-50 days old.

Harlequin Ducks have monogamous mating systems, meaning that pairs can remain
together for multiple years. The pairs generally exercise active mate-choice preferences along with the defense of pair-bonds in order to demonstrate fidelity to their mates, a characteristic that is unique to this species of ducks. Members of the pair also have the option to divorce the bond in favor of a higher-quality mate, although this behavior is quite
uncommon. Despite the strong bonds between the pairs, males play a very small role in the making of the nest and in the upbringing of the chicks. Females usually select nesting sites on cliff ledges, in holes in trees, and sometimes on the ground. The nests are then made of conifer needles, mosses, leaf litter, and small stones before being lined by down feathers.

The Harlequin Duck is a great iron-on patch to start your collection with. The patches are durable and can be sewn on or ironed on to just about anything.

Stickers are a great way for you to display your love for bird watching and the Harlequin Duck. We sell a monthly subscription sticker pack. The sticker packs have 12 bird stickers. These sticker packs will help your kids learn new birds every month.