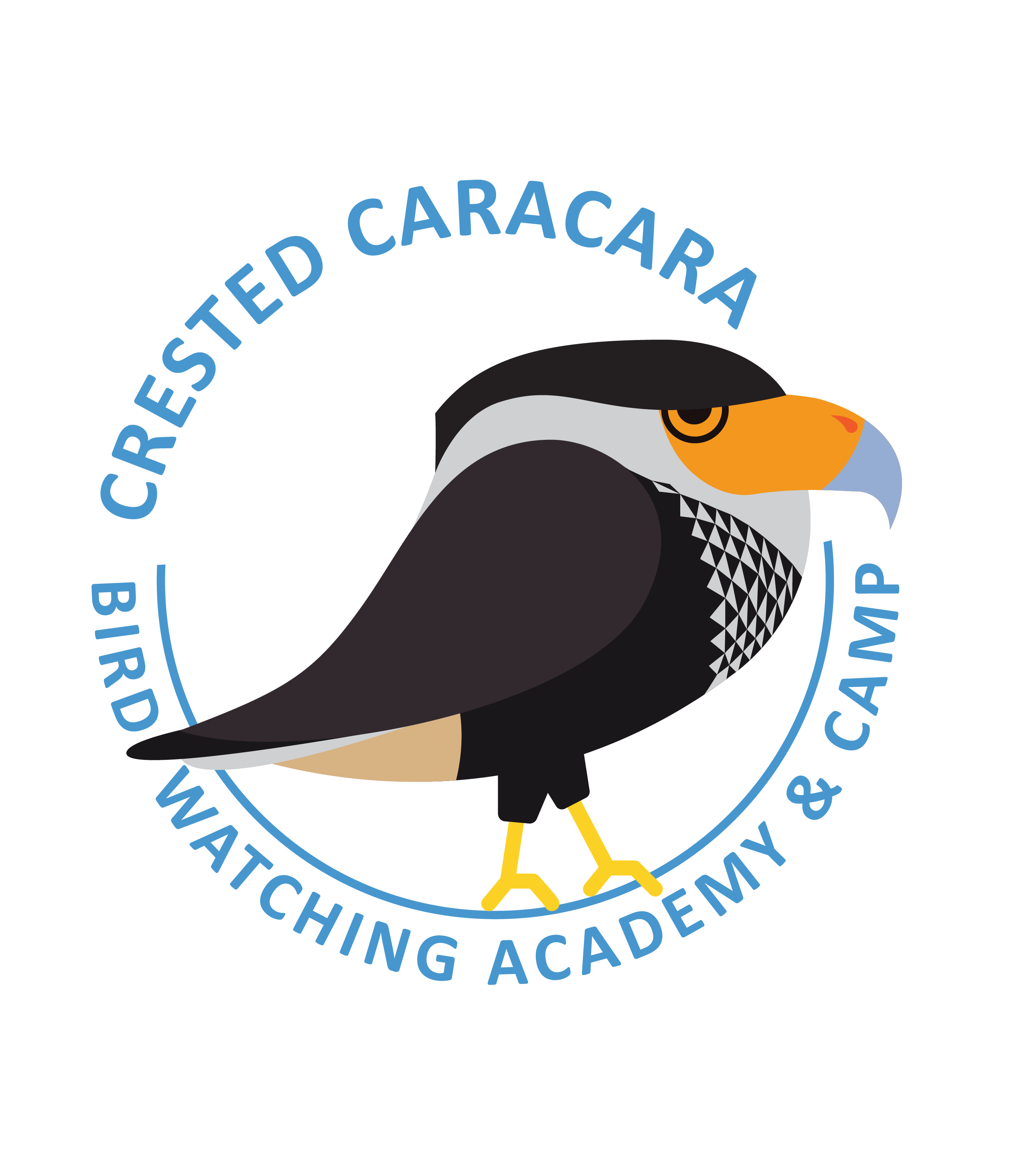 The Crested Caracara is also known as the Northern Caracara or the Northern Crested Caracara is a large bird native to North America. They are rare birds found in the extreme southern regions of North America and they are birds of prey as they belong to the family Falconidae. Numbers have declined in parts of the United States though, the numbers seem to be increasing in Texas due to conservation efforts. Numbers decline is attributed to the loss of habitat and being shot by hunters.

Crested Caracaras are large birds that closely resemble hawks. They are 20-26 inches long, with a
wingspan of 47-52 inches. The average weight of these birds is 3lb. The size of Crested Caracaras
can commonly vary depending on the region they reside in. Crested Caracaras residing in colder
climates tend to be larger than those that reside in tropical regions. These massive birds are one of
the largest species of falcons in terms of mass. Immature Crested Caracaras are similar in
appearance to the adults, but their plumage is slightly duller. Both adult males and females have
similarly colored plumage.

The adult Crested Caracara has black wings, body, crest, and crown. It is distinctively white on the neck, ramp and some wing patches. The tail is white towards the mid-section but black at the end. Its breast is white with some black barring.

It is a bird of prey but when compared to other types of birds in the family Falconidae, it is relatively sluggish in flight. As such, it would rather scavenge for food instead of hunting for prey. People interested in birdwatching will often find them walking or running on the ground scavenging for food.

They keep their territories all year round and do not like socializing with other birds, especially during their breeding season.

Crested Caracaras are highly opportunistic birds that can survive on a variety of foods. Carrion is
the primary source of nutrition for these birds. Other prey hunted by them include amphibians,
reptiles, mammals, insects, and fish. These intelligent birds hunt in a variety of areas to get the
most out of their habitat. They can be spotted hunting in shallow water to find fish, turning over
debris to uncover insects, and stealing eggs from nests of other birds. These birds are also known
to follow vultures with the objective of joining them to feed on carrion because they need the
assistance of larger birds to break open large carcasses. One unique hunting feature of these birds
is that they do not directly pounce on their prey like other raptors, instead they fly toward their prey
until they overtake it.

They eat a wide variety of small animals found dead or alive. They include ground squirrels, rabbits, skunks, and various birds including their young ones and eggs. They also eat snakes, frogs, lizards, young alligators, fish and, large insects.

Crested Caracaras are birds that need open areas for hunting. Grasslands, deserts, scrublands,
and rangelands are areas that serve as ideal hunting grounds for these birds. The reason these
birds avoid grounds with dense vegetation is that thick ground cover prevents them from
taking a running start for their flight.

The Northern Crested Caracara can also be found in the northern regions of South America in various habitats. They like prairies and rangeland. These are semi-open spaces where they could hunt efficiently and have enough cover for nesting.

Crested Caracaras are birds of prey that are most commonly found in the southern united states, along
the Mexican-American border, Baja California, Panama, and Eastern Texas. These birds are
common vagrants to areas around their range such as Nova Scotia and Michigan. Vagrant Crested
Caracaras have been found as far up north as Canada. These birds are usually permanent
residents of their range.

The female Caracara can lay up to 3 eggs which they incubate for about 30 days. After hatching, the young take 6-8 weeks for their first flight but still continue to stay with their parents for a few more weeks. They have a lifespan of about 9 years.

Crested Caracaras are mainly monogamous birds that do not form new pairs until their previous
mates die. Unlike other falcons, Crested Caracaras build their own nests by using sticks, plant
material, and various grasses. These birds generally construct their nests on cabbage palm trees
and command large nesting territories. Crested Caracaras generally breed between January to
March and lay about 2-3 eggs. Both male and female Crested Caracaras incubate their eggs for
about 32 days, after which off-white younglings are hatched. For another 3 months, the parents
teach various skills such as hunting prey and avoiding predators to their younglings. After this
period, the juveniles leave their nesting territories to form families of their own. These birds
generally raise one brood annually, but it is not unusual for them to raise another brood.

The Crested Caracara is a great iron-on patch to start your collection with. The patches are durable and can be sewn on or ironed on to just about anything.

Stickers are a great way for you to display your love for bird watching and the Crested Caracara. We sell a monthly subscription sticker pack. The sticker packs have 12 bird stickers. These sticker packs will help your kids learn new birds every month.