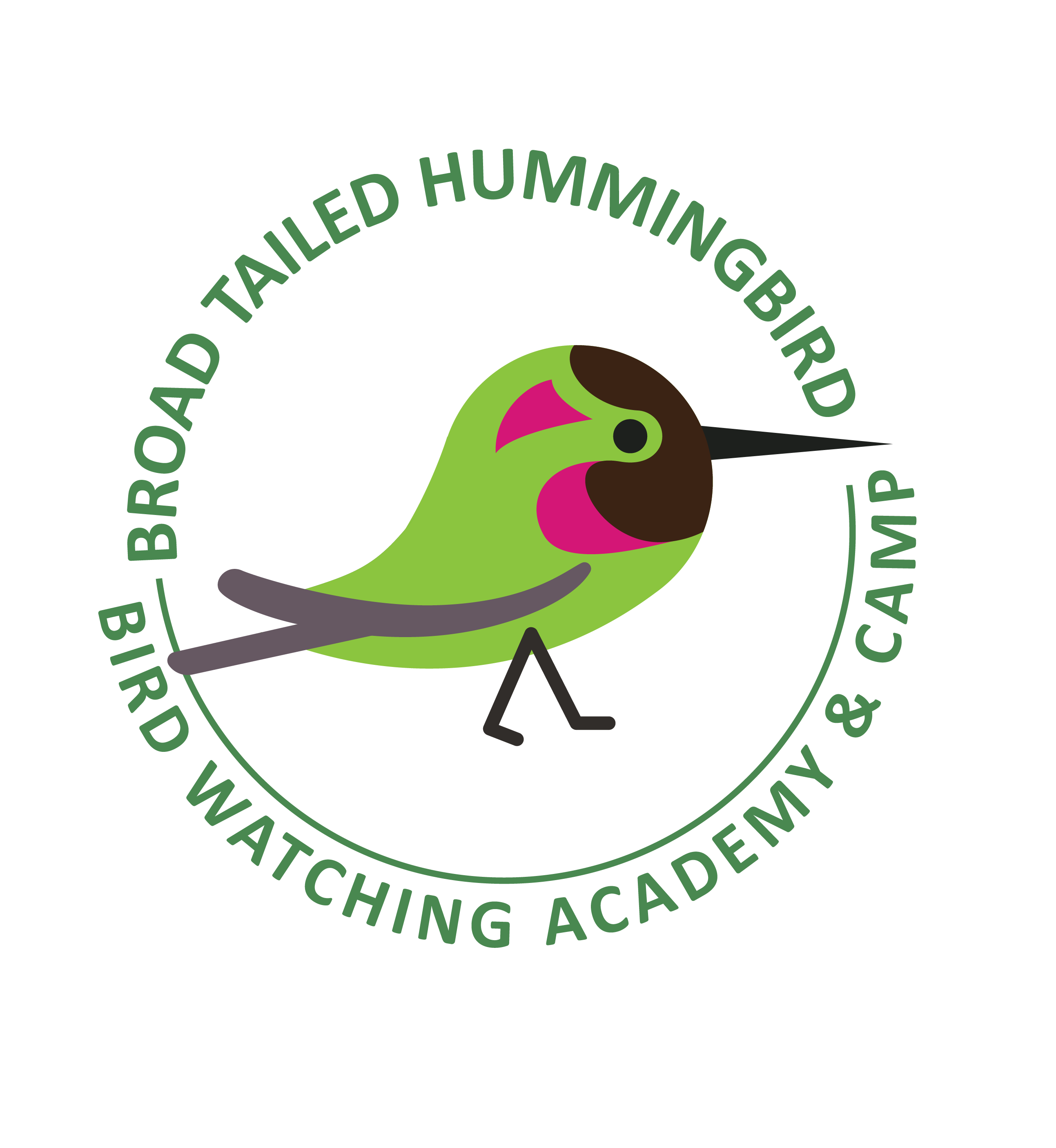 The broad-tailed hummingbird is a species of hummingbirds found in the Western United States, Mexico, and Guatemala.

These birds are medium-sized hummingbirds with slender bodies, large heads, and long and straight bills. They are about 4 inches in length with a wingspan of approximately 5 inches. They are distinctly longer tailed than other hummingbirds; these rounded black tails extend beyond the wingtips when perched. They also display an iridescent green, black, or white band of feathers encircling their eyes. This species shows sexual dimorphism – meaning males and females have different characteristics. The females tend to be larger than the males with muted colours. Males can be identified by an iridescent rose-red patch of feathers on the throat and upper breast. The females of the species tend to be of paler colours, but possess spotted cheeks which are absent in males.

Both sexes are of equal size.

Males and females both have a green crown that extends down to their backs and a white breast. The male has a brilliant red-pink gorget that shines when hit by sunlight from a certain angle. It has a broad black tail that has green, rufous and white accents.

The female is less colorful with pale, rust-colored sides and outer tail feathers that are banded in rufous, green, black and white.

The juveniles resemble the females but have ruffled feathers.

They can be found in elevated and other high-altitude areas near woodlands and evergreen forests. These birds thrive in shrubby habitats in and around pine oak and evergreen forests. They primarily reside under tree canopies or in the understories of forests – a layer of plant growth that does not penetrate the tree canopies but is above the forest floor. Breeding happens in meadows and open woodlands from around 5,000 – 10,500 feet elevation before they move to lowland areas with abundant flowers during migration. In winter, they forage through the understories of dry thorn forests, pine-oak forests, and tropical highlands found throughout Mexico.

They dwell in the meadows and mountain forests in the Western United States in summer. When summer ends, they migrate to the southern parts of El Salvador.

The resident birds, however live in cordilleran mountain areas of Northern Mexico angling towards Guatemala.

The broad-tailed hummingbirds are not shy of humans and can at times be found nesting in habitats artificially made for them by man.

Broad-tailed Hummingbirds are unique hummingbirds that are found along the highland regions from western Canada and United States to Mexico and Guatemala. Due to the wide geographical range that they can be found in, these birds are partially migratory. Their routes depend on the northern range during the winter, with hovers residing in western Canada and America migrating to southern regions of Mexico and Guatemala in winters. The males generally begin migrating before the females. Some hovers in Mexico and Guatemala do not migrate at all and display sedentary behaviours that have been categorized as variant by ecologists.

Broad-tailed Hummingbirds follow a diet which primarily consists of flowers and insects. Since hummingbirds are also pollinating agents, they feed on the nectar of variants of flowers that are marked by high nectar production and are generally characterised by red corollas. These flowers include sage, glacier lily, red columbine, Indian paintbrush, scarlet gilia, and pussy willow. They also consume sugar water from feeders. Since nectar is low in protein, the birds also include insects into their diets. These insects are caught from leaves, spiderwebs, or are simply snatched from mid-air.

Broad-tailed hummingbirds are primarily nectar feeders, using their long bills and long extendable tongues to reach into nectary flowers. They also feed on insects that they catch on their wings during flight. Where nectar is unavailable, they feed on sap from sap wells dug by sapsuckers.

Primarily, they are solitary birds that do not interact with other broad-tailed hummingbirds or birds of other species. They only interact during breeding season when the males court the females and put on flight displays to attract them. After mating, the males leave before the eggs hatch and therefore the females are left to cater for the young one on their own.

The nests are built by the females alone in a span of 4 – 5 days. The nests are usually between 1 – 5 feet above the ground and are built on evergreen or aspen branches, or in willow or alder thickets. They are cup-shaped nests built out of spiderwebs and gossamer, materials that provide excellent insulation in high altitudes. The outer parts of the nest are camouflaged with moss, bark fragments, and bits of lichen. Materials can be added to the nest during the incubation period, which lasts for 16 – 19 days, causing the nest to become taller over time. The nest also stretches into a platform-shaped enclosure once the chicks begin to grow. An average clutch consists of 2 eggs. Studies have shown that most females return to their old nests each year, in which case they add new elements to their old nests.

The Broad-tailed Hummingbird is a great iron on patch to start your collection with. The patches are durable and can be sewn on or ironed on to just about anything.

Stickers are a great way for you to display your love for bird watching and the Broad-tailed Hummingbird. We sell a monthly subscription sticker pack. The sticker packs have 12 bird stickers. These sticker packs will help your kids learn new birds every month.