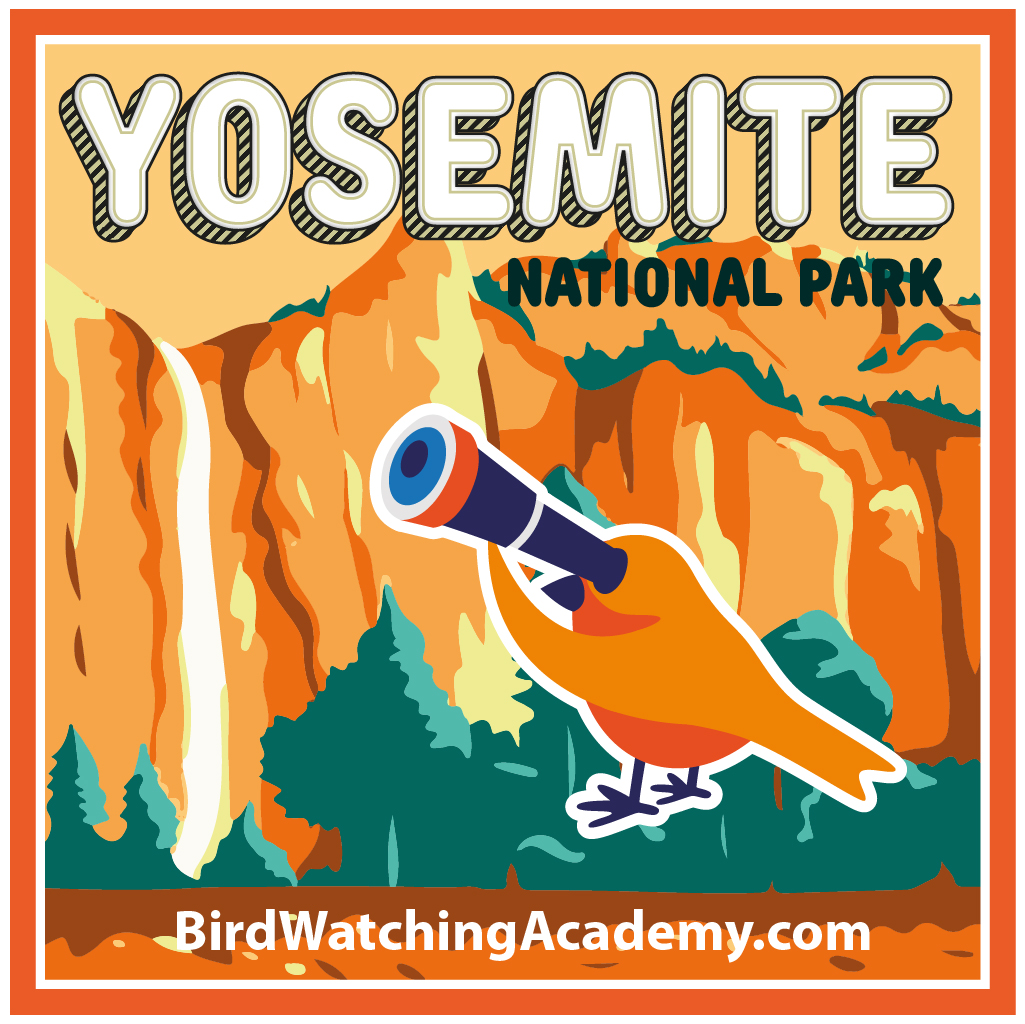 Due to the diverse landscapes, National Parks have a plethora of wildlife that any animal lover will surely appreciate. This is why bird watching in Yosemite National Park is so fun.  National Parks are also home to various archaeological sites and historical trails. So while others will be lounging in the sand or sitting on a couch, you can soak up in history, science and more at a National Park.

While some parks are filled with adventurist activities, others are more relaxing and give you a chance to unwind. National Parks even provide different accommodations to its visitors. You can choose from a hotel, cabin, lodge, or camps.

In the tech-savvy world, a trip to a National Park is a pretty good escape from the world of electronics and lets you have a dose of nature. One such National Park, which is an icon of majestic beauty, is Yosemite National Park.

Overview of the Park

Stretching nearly eight miles from east to west with granite walls more than the height of the Empire State Building, Yosemite Valley is a wonder of the natural world.

Glacier Point’s panoramic vistas are described as breathtaking, and truly a can’t miss spot in Yosemite National Park. The visitors are treated with panoramic views of Yosemite Valley as well as landmarks such as Half Dome and Yosemite Falls. Imagine the bird watching you could do from this vantage point!

Hiking is indeed a powerful cardio workout that is good for your health. Besides this, hiking is believed to reduce the risk of low blood pressure and cholesterol and helps to prevent diabetes.

Yosemite National Park has become quite crowded in recent years. The best way to get away from the crowd is to get onto a trail. The Half Dome Trail is one of the fantastic trails in the park and a bit difficult too. Because of its popularity, it is difficult to get a permit, but if you get lucky, then this will be your most memorable experience of Yosemite National Park. You will see splendid views along the trail and get the thrill of going up the cables from sub dome to half dome.

If you can’t get the permit to half dome, you can take the mist trail, which is the first part of the hike on the way to half dome. You get to see some of the best scenery and can climb the stone steps to see the 317 foot, Vernal Falls.

The best views of Yosemite National Park have Half Dome in them. But in case it’s not your preferred trail, then Clouds Rest has some amazing sights to offer. Perks – There are fewer people, which makes you enjoy the solitude. This is where many people also enjoy bird watching.

There is nothing better than actually staying inside the National Park and exploring it day and night. The best Yosemite hotels are situated in the park itself.

The Ahwahnee was made to highlight its natural surroundings. Known for its stunning interior design and architecture, this hotel offers a perfect balance of history, hospitality, and elegance. Its surroundings include Yosemite Falls, Half Dome, and Glacier Point.

Wawona Hotel is one of California’s original mountain resort hotel and was initially established in 1856. This Victorian-era style hotel is situated 27 miles from Yosemite Valley. Golf Course, seasonal outdoor swimming pool, beautiful dining room are some amenities provided by the hotel.

People who love outdoor activities and nature can consider camping as the most refreshing part of the journey to Yosemite National Park. Many people that choose to camp also enjoy bird watching.

There are various campsites in Yosemite National Park which offers panoramic views and a chance to experience nature from proximity.

North Pines campground is set amidst towering pines, granite cliff walls, and alongside a rushing river. Located at the far end of Yosemite Valley, this campground has a beautiful setting, fantastic location, and a woodsy feel.

Upper Pines Campground is covered with towering pines and cedars that provide a mix of shade and sun. One can easily walk from here to several trailheads.

Tuolumne Campground is an excellent choice for people interested in exploring the hikes and sites along the Tioga Road. The elevation here is 8,600 feet, so night gets cool.

Around 704 species of birds have been spotted in California State. Yosemite’s diverse terrain, including woodlands, cliffs, meadows, alpine peaks, forests, and numerous streams, attract birds all year. With 258 birds spotted in Tuolumne County, 280 in Mariposa, 375 in Mono, and 296 in Madera, Yosemite National Park becomes a perfect site for bird watching.

You can make your own observations or be a part of birding tours organized by Yosemite Conservancy. You can also be a part of one of the free bird watching walks led by park rangers.

So be ready for lots of knowledge about these beautiful, colorful birds and enjoy bird watching in Yosemite National Park.

A Ruddy Duck is a small, compact duck with a stout, scoop-shaped bill. It has a long, stiff tail that it often holds cocked upwards. A ruddy duck has a slightly peaked head and relatively short, thick neck.

Males have blackish caps that contrasts with bright white cheeks. They have rich chestnut bodies in summer and dull gray-brown in winters. Females and first-year males are similar to winter males but with a blurry stripe across the pale cheek patch. Ruddy Duck feeds on aquatic invertebrates, especially midge larvae. They can be commonly found in nest marshes adjacent to lakes and ponds.

California Quail are plump, short-necked game birds with a small head and bill. Their tail is fairly long and square. Both males and females have a comma-shaped topknot of feathers projecting forward from the forehead.

Adult males are gray and brown, while females are more everyday brown. California Quail has a pattern of white, creamy, and chestnut scales on the belly. They spend most of the time on the ground walking and scratching in search of food. They travel in groups called coveys.

California Gull is a medium-sized gull with a small head. Its bill is slender as compared to other gull species. Breeding gulls are white-headed with a medium gray back, yellow legs, and dark eyes. Non-breeding adults have a brown streak on their heads. Adults have a yellow bill with a black ring and a red spot.

These are strong, nimble fliers and opportunistic foragers and breed on sparsely vegetated islands and levees near inland lakes and rivers. They forage in open areas like garbage dumps, pastures, orchards, meadows, and farms to find food.

Adults are snowy white with black flight feathers visible only when wings are spread. Immatures are mostly white, but the head, back, and neck are dusky. American White Pelican dips its beak into water to catch aquatic animals and fish. They spend winters on coastal waters, bays, and estuaries.

Osprey are large, distinctively shaped hawks. Despite their size, their bodies are slim with long, narrow wings. Ospreys fly with a pronounced kink in their wings, making an M shape when seen from below.

Whiter than most raptors, Ospreys are brown above and white below. They search for fish by flying on steady wingbeats and bowed wings or circling high in the sky above the water. They can be found around nearly any body of water like salt marshes, rivers, ponds, estuaries, and coastal reefs.

It is mostly black above with a red cap, creamy white face, and black patch around the bill. Females display less red on the crown.

They live in large groups and breed cooperatively. Acorn Woodpeckers spend considerable time catching insects on the wings. They live in oak and mild-oak evergreen forests on slopes and mountains in the Southwest and West coast.

Black Phoebe are small, plump birds with large heads and medium-long, squared tails. Their bill is straight and thin. They are mostly gray on the upper part and chest, with a slightly darker blackhead. These flycatchers can mostly be found near water.

Loggerhead Shrike are thick-bodied songbirds with a large, blocky head. It has a thick bill with a small hook and a reasonably long, rounded tail. Loggerhead Shrike is a gray bird with a black mask and white flashes in the black wings.

They sit on low, exposed perches and scan for rodents, lizards, birds, and insects. Their typical habitat is the open country with scattered shrubs and trees.

Western Bluebird are small thrushes that usually perch upright. Western Bluebirds are stocky with thin, straight bills. They are shiny-blue above with rust-orange extending from a vest on the breast onto the upper back. Females are gray with a pale orange wash on the breast and blue tint on the wings.

They rely on trees both for nesting and hunting activities. They can be found in open woodlands, both deciduous and coniferous.

Lesser Goldfinch are tiny, stub-billed songbirds with long, pointed wings, and short, notched tails. Males are vibrant yellow below with a glossy black cap and white patches in the wings. Their backs are glossy black or dull green. Females and immature Lesser Goldfinches have an olive color back and dull yellow underparts.

They are common in the suburbs, but depending on food availability; Lesser Goldfinch can also be found in mountain canyons and desert oases.

While visiting Yosemite National Park, it’s essential to prepare for extreme weather. Pack your bags accordingly. Because of abundant scenic beauty, you might need extra camera batteries and don’t forget your binoculars for some awesome bird watching.  Also, pack lots of sun protection and water to drink. Carrying a map is essential, which you can download from various online websites or grab from the visitors center. Lastly, don’t let the rain dampen your spirit. Tuck a foldable rain jacket in your bag make your visit a memorable and adventurous one!