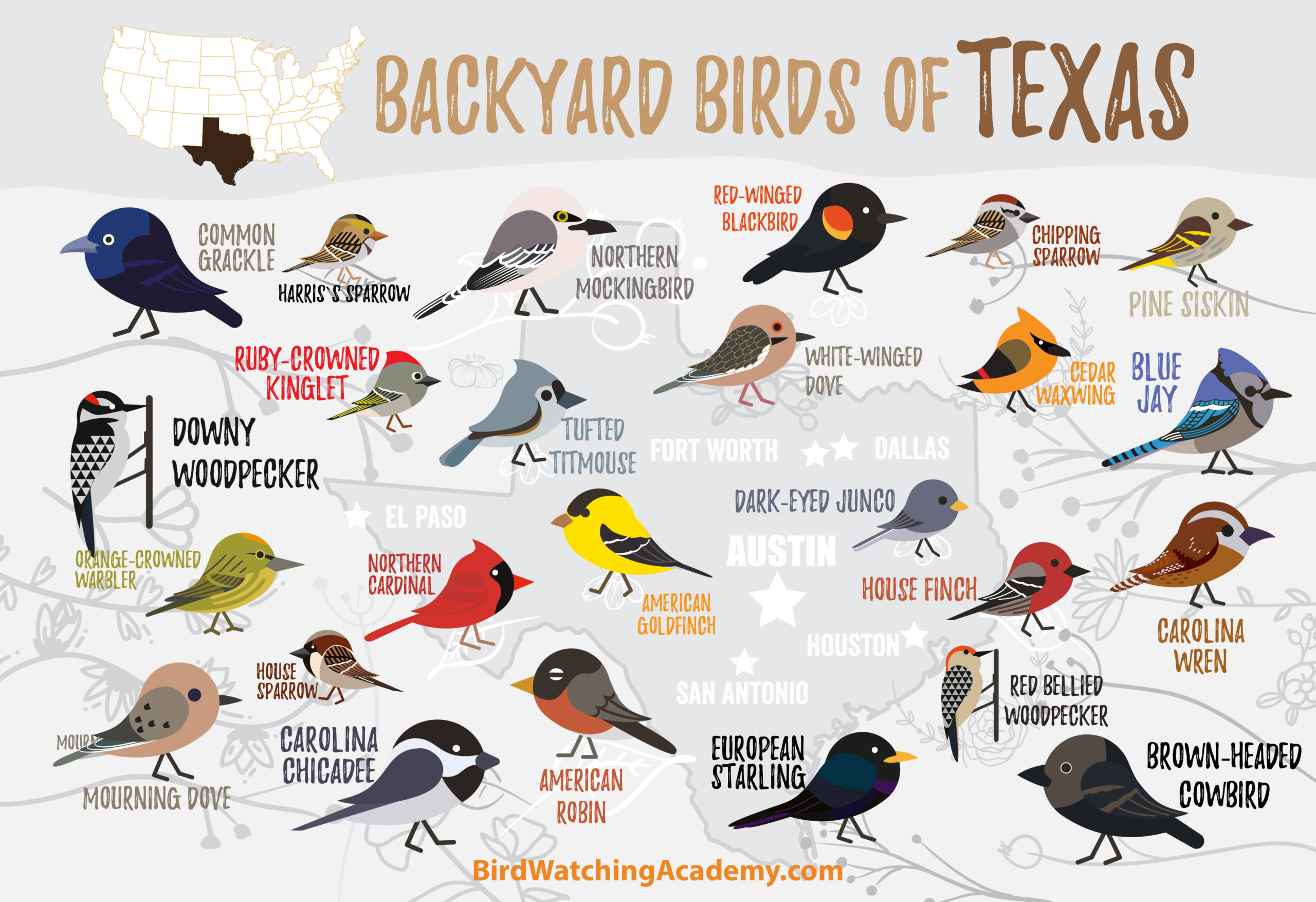 Texas is the second state with a great backyard bird count. This state covers everything, starting from deserts to marshes, making it the best location for birds to get comfortable.

Northern Mockingbird was officially approved as a state bird in 1927. This is one of the most prevalent birds in Texas. Besides, this bird can produce approximately 200 sounds easily.

The Most Common Spots to See Birds in Texas

Brazos Bend State Park is around 30 miles from Houston, which is beautiful for the backyard birds and for its attractiveness. Getting backyard birds in this state is every bit achieving when you find Purple Gallinule, Anhinga, or Roseate here.

Furthermore, Aransas National Wildlife Refuge contains approximately 400 bird species. In addition, Ladder-backed Woodpecker, Crested Caracara, as well as White-tailed Hawk are the breeders; however, the refuge is recognized as one bird specifically.

Similarly, the Whooping Crane also lives there. It has around five feet in height and shelter because it is one of the vanishing birds. Big Bend National Park holds a location among the chief birding destinations.

This place is the hub for professional photographers, hikers, and history fans because everybody has something to go bird watching. You can find Curve-billed Thrasher, Crissal Thrasher, or Pyrrhuloxia here.

Texas contains a great backyard bird count. It has around 672 bird species. However, the bird species are so dispersed all over the state that you can find only 468 bird species in Cameron. On the other hand, Nueces, Hidalgo, Galveston, and Brazoria contain around 456, 447, 436, and 424 correspondingly.

You should go to regions having a lower bird total if you want to find all the backyard birds in Texas. Furthermore, Aransas National Wildlife Refuge is the ideal birding place in a state similar to Texas, having a count of around 366 bird species.

Moreover, Laguna Atascosa National Wildlife Refuge, as well as South Padre, is also a base that several bird watchers in this state would love, having the count of approximately 361 and 354 backyard birds.

Red-tailed Hawk, also called the Chicken Hawk, is a part of almost any of Texas’s open territories. Frequently, you will find them on the roads, perched by its giant claws as it appears as if it’s controlling the traffic!

Besides, Barn Swallow is usually called ‘mud swallow’. This is because of the bird species’ habit of assembling mud to form its cup-like nests. Frequently orange from the anterior side, the bird contains black wings and a dark top.

The European Starling is the most numerous songbird found throughout North America. They are all-black bird with short tails, pointed bills, and triangular wings. Although in the winter, they are covered with white spots. European Starlings are sometimes viewed as aggressive as they run along the ground.

Cedar Waxwings have a silky, shiny body that is brown and gray. These birds like to eat berries and can be found perched in fruit trees. The Waxwing has a high, thin whistle. Many times you will hear a Cedar Waxwing before you will see it. The Cedar Waxwing can be found throughout North America.

The Pine Siskin is found throughout North America. Pine Siskins are small songbirds with pointed bills and a short tail. They are brown birds with yellow on their wings and tails. Pine Siskins can be found in pine trees looking for seeds, sometimes even hanging upside down.

The Mourning Dove is a graceful bird with a small head and tail. These Doves can be found throughout North America. Mourning Doves perch on telephone wires or other high locations. Their flight is fast and straight. The Mourning Dove likes to eat seeds usually found on the ground.

The Most Common Backyard Birds to See in Texas

Northern Mockingbird is a popular bird in Houston, Dallas, as well as Austin. Besides, Great Blue Heron, as well as Painted Buntings, are also prevalent backyard birds. Indeed, it is not that difficult to find Turkey Vultures in cities. Thus, almost all backyard birds are common in Texas.

You can’t be a birder and not go to the state to at least have an opportunity to find all the backyard birds in Texas. Texas has the second-highest backyard bird count. If you are keen enough, you will find the rarest of bird species in this state.