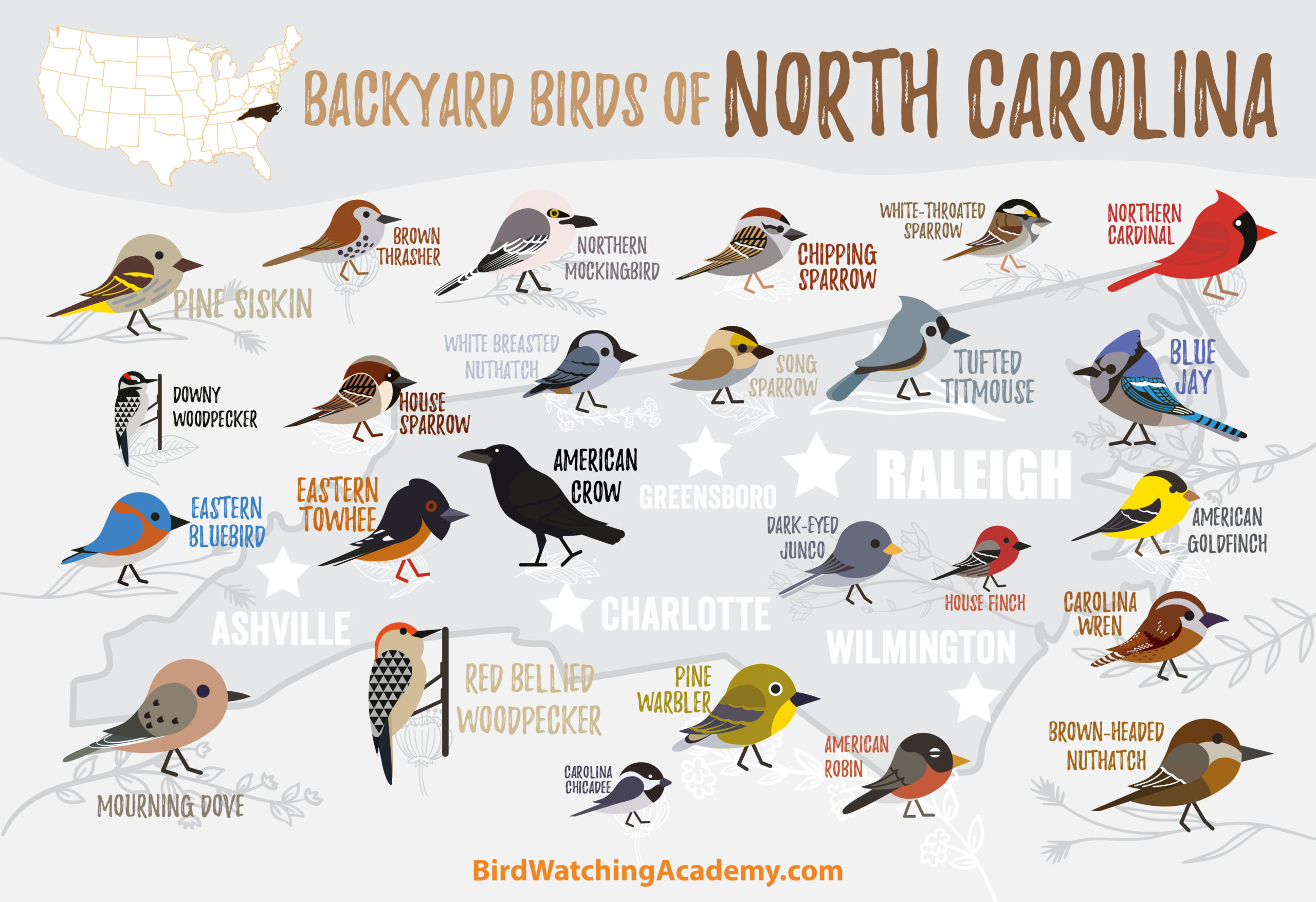 For people who like it, birding might be a fun leisure activity, particularly when you’re birding in a state like North Carolina. Here you find a wide range of backyard birds. Let’s see how you can commence your birding explorations here.

In 1943, the Northern Cardinal was accepted as North Carolina’s state bird. It is also stated as the Winter Redbird as one mostly finds it in the cold season. Similarly, it is the only bird having a clear red color throughout that time. The male bird is almost entirely red, excluding its beak and throat with black color. Female Cardinals have red tails, wings, as well as crests.

The Most Common Spots for Bird Watching in North Carolina

It contains murky roads created by dunes, enclosed with oak trees. Its grassy parts make an amazing adventure place for bird watching. Jordan Lake allows you for birding in Raleigh-Durham-Cary and the rest of NC where you can find 60 different eagles during the summer season.

In North Carolina, approximately 481 species have been recorded. If you have the enthusiasm to discover the whole state or the wish to offer your remaining life to it, that’s the total number of bird species, you will find.

Hotspots such as Pea Island NWR having around 323 bird species, Cape Hatteras containing bird 292, and Bodie Island having approximately 288 species are the regions where you can find a wide range of backyard birds.

Backyard birds of North Carolina are as attractive as they’re wonderful. You have the splendid Tundra Swan having a wingspan of seven feet frequently present in Lake Mattamuskeet. After that, you find the Peregrine Falcon which nearly went extinct; however, it can now be observed in places, for example, Pisgah National Forest.

Chipping Sparrows have a bright brown crown on the top of their head, a black eyeline, and are grayish underneath. Their wings are streaked dark and light brown with a wingbar. They are seen throughout the U.S. They can be seen in trees and grassy areas and like to make their homes in open woods, orchards, and other farmlands. They mostly eat insects and seeds but will also eat grasses and other plant material. They make their nest in trees up to 15 feet high. They lay 2 to 7 eggs. They migrate short distances and some are permanent residents.

The Blue Jay is a common songbird with a noisy call. Blue Jays are known for their beautiful blue and white color. Blue Jays also have rounded wings and a long tail. Blue Jays are smart and stay together with their family. They are found in the Midwest and the Eastern United States. Blue Jays love to play with acorns. Sometimes Blue Jays will imitate the sound of a hawk to scare other birds away.

The Most Common Backyard Birds to See in North Carolina

Additionally, you can also see a wide range of backyard bird species while visiting the more inhabited regions of North Carolina. Similarly, cities like Charlotte, Raleigh-Durham-Cary, as well as Greensboro are home to a lot of bird species.

North Carolina has very much to give its bird watchers; you just have to see where to look. The plenty of parks all over the state makes it promising for bird watchers to get an educational and exciting experience.