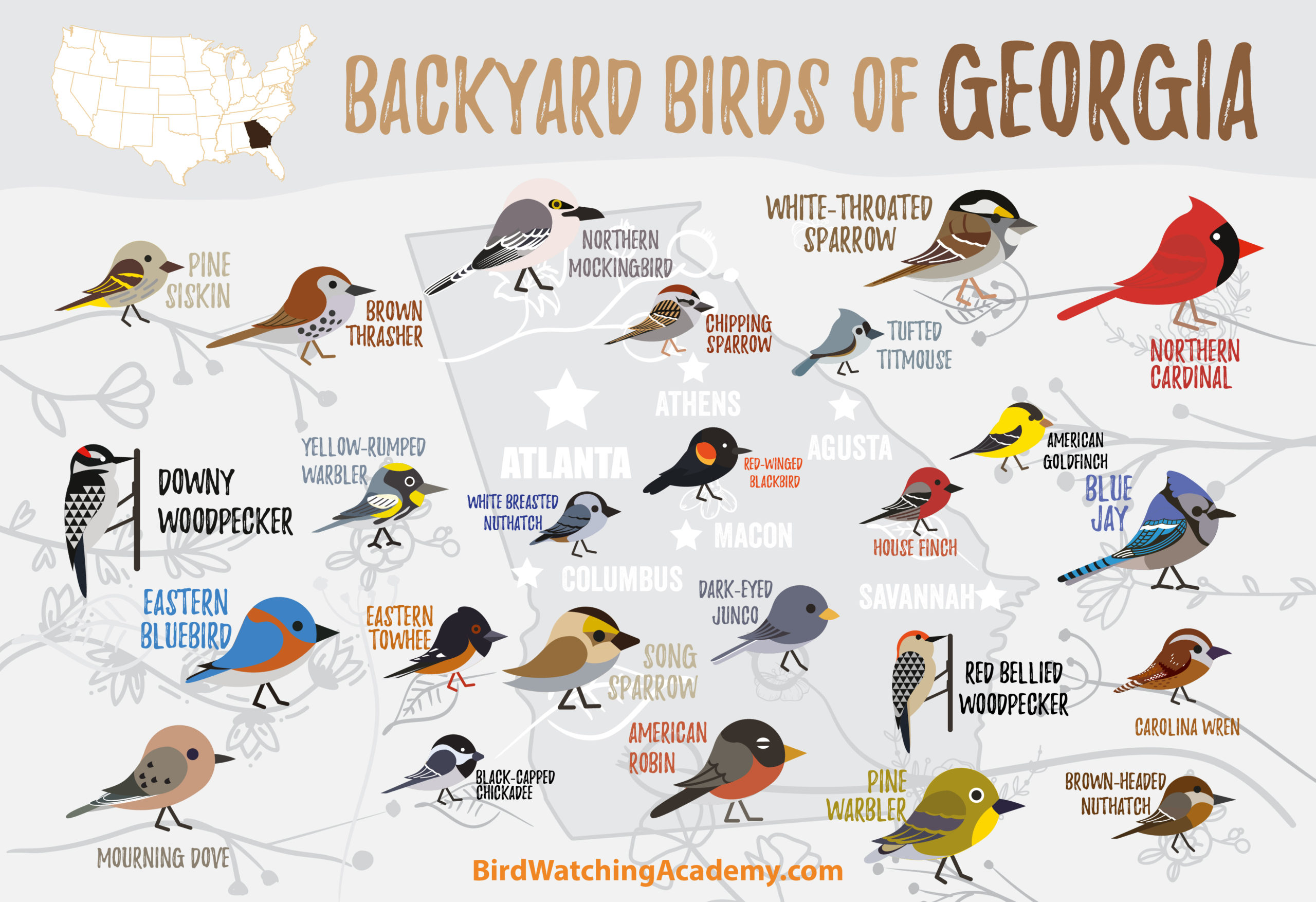 Bird watchers living in Georgia may have their peak of the marshlands or the woody mountains. Otherwise, it can be the coast where you may have your fill; still pure in several locations in Georgia from restaurants and houses, the seashore hosts a huge number of songbirds as well as shorebirds. Let’s dive into how you can find backyard birds of Georgia.

Although the Brown Thrasher was declared as the state bird of Georgia in 1935, it wasn’t till 1970 that things were authorized. The Brown Thrasher is generally about a foot having a corresponding long tail and beak- the beak being quite curved.

The upper portion of the Brown Thrasher is brown of course; however, the chest, as well as the underbelly part, is white, having brown-colored sprinkles. In addition, the wing bars also contain a deep white shade.

The Most Common Spots for Bird Watching in Georgia

You have around the 1.2-mile of the covered road; you can find warblers, thrushes, and vireos.
During the last days of April, you can be guaranteed you will find Cerulean Warbler at least one
time.

Furthermore, 10 minutes from Federal 95, Harris Neck National Wildlife Refuge gets ranks
among backyard birds in Georgia’s best spots for bird watching, having a maximum of 260
species. The woodlands, swamps, and ponds make for the best birding place all over the year.

The location contains an auto-tour hoop you can drive and climb through, with the probabilities
of finding Northern Parula and Northern Bobwhite. Among the national parks, Fort Mountain
State Park has observed above 300 species, having Ruby-throated Hummingbirds as well as Bald
Eagles.

With a total of approximately 431 backyard bird species found in Georgia, the region of Glynn can claim around 359 species among them. Another one is Chatham having 350 bird species, and Mcintosh having around 330 species.

If you like to see a diversity of backyard birds at a site though, Jekyll island having approximately 302 species, must be on your list. After that, you have Sapelo island having around 267 species, and Harris Neck having 262 species. In contrast, Saint Catherines Island contains 266 backyard bird species.

The Blue Jay’s remarkable blue color blends are hard to overlook. However, the occurrence of the birds is frequently felt before they’re observed, special thanks to the dense, rusty noise they produce. You can observe them in the snowy regions of Georgia.

Besides, Northern Mockingbirds are frequently present in Atlanta. As the name shows, the birds are experts of mimicry. Additionally, the male species of Ruby-crowned kinglet show their red crown once they try to invite potential mates.

The Song Sparrow is one of the most familiar Sparrows. It has a brown and gray body with streaks. Song Sparrows are found all over North America. Their coloring can change depending upon the area they are in. Song Sparrows nest in shrubs and around wetlands. They eat small insects but will also come to bird feeders for seed.

The Blue Jay is a common songbird with a noisy call. Blue Jays are known for their beautiful blue and white color. They also have rounded wings and a long tail. Blue Jays are smart and stay together with their family. They are found in the Midwest and the Eastern United States. Blue Jays love to play with acorns. Sometimes Blue Jays will imitate the sound of a hawk to scare other birds away.

The Most Common Backyard Birds to See in Georgia

Red-winged Blackbird is among the most common birds in Georgia. As the name shows, the bird species contain black bodies having red wings and beaks. Besides, Common Grackle, as well as Tree Swallow, are also observed in large quantities among the backyard birds of Georgia, frequently chirping out from the trees.

If you are not familiar with where to go to see birds in Georgia, you can visit the shores for bird watching. You are bound to find at least some remarkable and colorful backyard birds there.