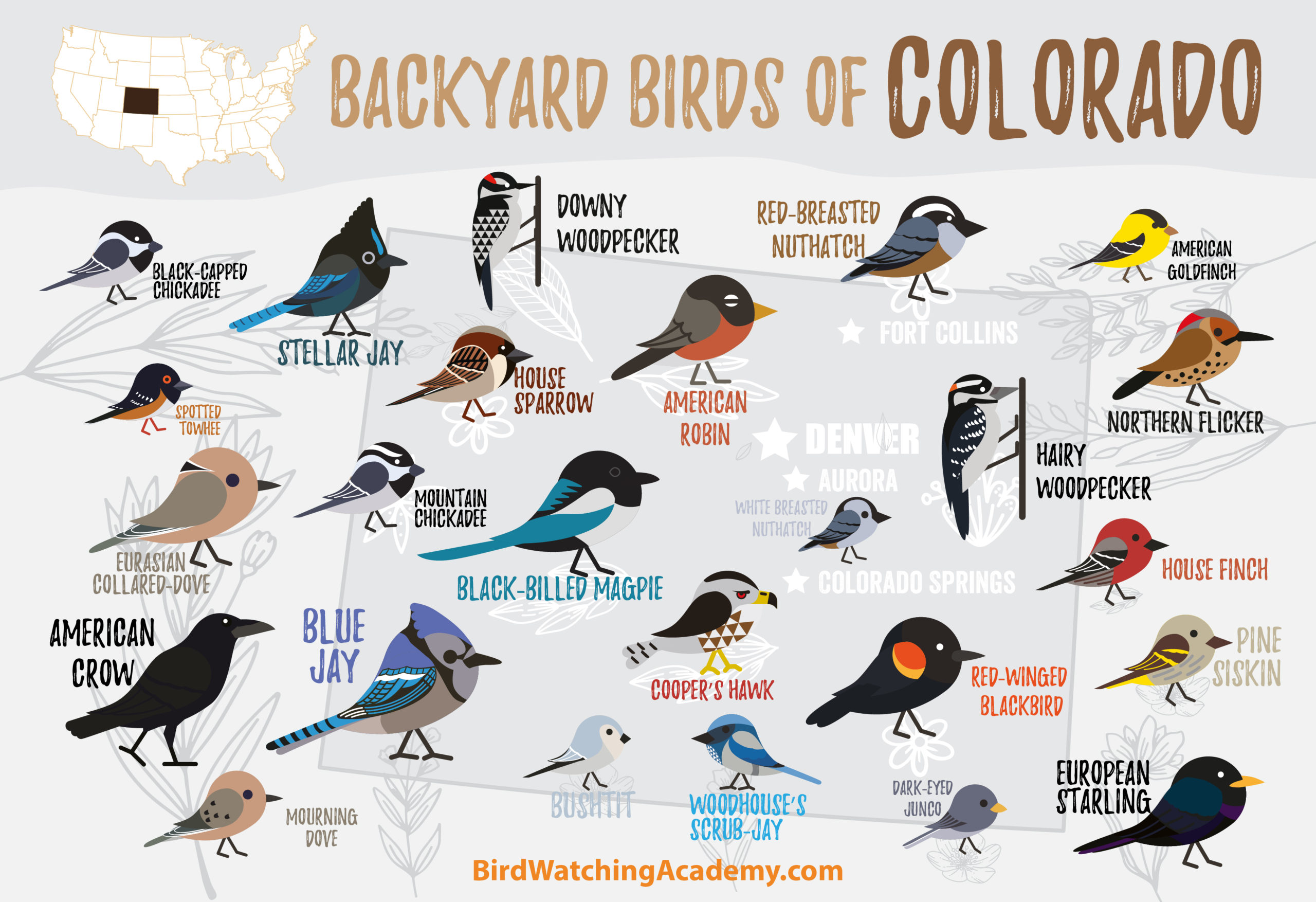 Whether it is the flapping of the wings or the chirping and singing, birds are the soundtrack for summers for everyone. They rise with the sun and set with it as well—the epitome of nature. Colorado has many things, the vivid landscape, plateaus, mountains, canyons, and whatnot. What it also has in abundance is a vast array of birds. Whether it is the regal look of a Black-billed Magpie or the adorableness of a Black-capped Chickadee, Colorado has it all.

Most people like watching birds when they are taking a stroll in the park or even in the comfort of their own home. For many, it is a known way to connect with nature and detach from the busy world. Today we will go through the most common backyard birds that you will find in Colorado. Although we cannot name All of them due to their sheer quantity, we can try naming those you are most likely to see. So, without any further ado, here are the most common backyard birds of Colorado.

American Robins, otherwise known as Turdus Migratorious, is a widespread resident of Colorado. You will find these famous songbirds all year round. Colorado’s most common backyard bird, the American Robin, is around 10 inches long, the same size as a Blue Jay. Their wings, although, extend way beyond their body. An American Robin’s average
wingspan is about 12 inches to 16 inches (30.58 cm to 40.64 cm). They have a very plump body, making them look adorable and a fairly long tail, especially considering their size. Their back is a plumage of a mixture of grays and browns, and their rump is a beautiful shade of rusty orange that gives them a very springy look. Their amazing caroling song is one of the earliest signs of spring in the North. You might also find some white feathers located on the underside of their tail.

Even though American Robins are abundant in Colorado, you will mostly find them in urban parks, lawns, farmlands, and even open woodlands. They also don’t hesitate to visit your backyard to grab an insect or two. And if you have any trees or bushes with berries in them, they won’t be shy when eating those delicious fruits. But if you don’t want them picking on your berries, try putting some fruits and nuts on a tray feeder or the ground. It might be enough to distract them from your cultivated berries. However, that is not a promise. After all, they are birds; you can’t really control them, can you?

Following the American Robin, Northern Flicker is the second most common backyard bird that you’ll find in Colorado. They are about 12 to 14 inches (which is approximately 30.48 cm to 35.56 cm). If the numbers confuse you, try to remember that they are around the same size as a Mourning Dove. They have a very stocky, or a very chunky built with short legs and a short tail but with a large head. Furthermore, their bill is almost the same size as their head, but it’s very thin, with a slight curve. A Northern Flicker, or if you want to call them by their highly complex name, Colaptes auratus generally have brown feathers with small black bars on them, with a black crescent on their rump.

Northern Flickers from the west and the east can be differentiated from the color of their head and the color of their underside of wings and tail. In the west, the color of their head is gray paired with bright salmon-red color on the underside of their wings and tails. Those that belong to the east, on the other hand, have brown heads with the bottom of their wings and tails being a beautiful shade of yellow. Northern Flickers like to stay around the edges of woodland and forests. Their primary source of food is insects, mainly ants, and beetles. That’s why you will find them on the ground pecking for insects. Although, if you want to attract them to your backyard, try using black oil sunflower seeds and suet as they are attracted to them.

Next on our list is a House Finch. Originally House Finches, also known as Haemorhous mexicanus, are from the west, but now they are found across most of the parts of the United States. House Finches have a medium built. They are around 6 inches (about 15.2 cm), starting from the tip of their tail to the tip of their bill. They also have a medium-sized, long tail and a precious round head with a short and conical bill attached to it. They have a brown tail, belly, and back, which is streaky. You can easily distinguish a female House Finch from a male House Finch.

The adult females are a brownish-gray color with thick but blurry streaks along their sides and a marked face. On the other hand, adult male House Finches have a rosy red chest, rump, and crown. Depending on their diets and genetics, the rosy red color can also be replaced with orange or even yellow (although it’s rare). The pop of color just adds to their rusty look.

Now here comes their most beautiful feature, the color of their feather. Their head, back, and breast are a lovely shade of black that makes them look mysterious. In contrast to the black, their shoulders and belly are stark white. Their wings, on the other, are black above with either a bluish or a greenish sheen. The same goes for their tail; it’s primarily black with an iridescent green-blue sheen.

With a round head, small neck, and tiny body, to call Black-capped Chickadees, sometimes also known as Poecile atricapillus, cute would be an understatement. These curious creatures love to investigate everything, and yes, that includes you as well. They have beautiful gray wings, tails, and back, with white cheeks. The top of their head is
black, the same as their beaks. You will mostly find them around feeders, quickly grabbing the seeds and flying away somewhere else to eat them.

Black-capped Chickadees need their privacy, and they are very sneaky in that matter. If not seeds, they love to nibble on berries, spiders, insects, and even suet. So their diet is flexible, to say the least. If you want to attract more of these adorable birds to your backyard, try using sunflower seeds, suet, peanuts as well as peanut butter. They are usually the first to find any feeders. Clearly, they love their food. Therefore it’s very likely for them to eat from your hand as well if you are lucky.

The American Crow, also known as Corvus brachyrhynchos, are birds we all are familiar with. Whether it’s their all-glossy black color or their familiar cawing that echoes throughout the day, we don’t know. An average American Crow is about seventeen and a half inches long (44.45 cm), starting from the tip of its bill to the tip of its tail. Their bill is the same size as their head, and they have a relatively short but square end tail. Pair all of this with a thick neck and rather long legs, and you got yourself an American Crow.

American Crows prefer to stay in open areas, so you will mostly find them around trees, farms, fields, and cities. They are also omnivorous, so you will find them feeding on insects, small mammals, grains, and carrots. Unfortunately, people usually do not like these blackbirds visiting their backyard. For many, it is because, in several cultures, a crow is associated with death. Hence many also call them ‘The Omen of Death,’ which gives them a terrible reputation.

So here you go, bird lovers. Now that you know about these beautiful creatures, you can attract them to your backyard and enjoy their singing and chirping day and night. What else can one want? They all are so similar, yet they have their unique set of attributes. We don’t think it is fair for us to choose our favorites out of the list, but that’s just us. But do
let us know which of these birds are your favorite?