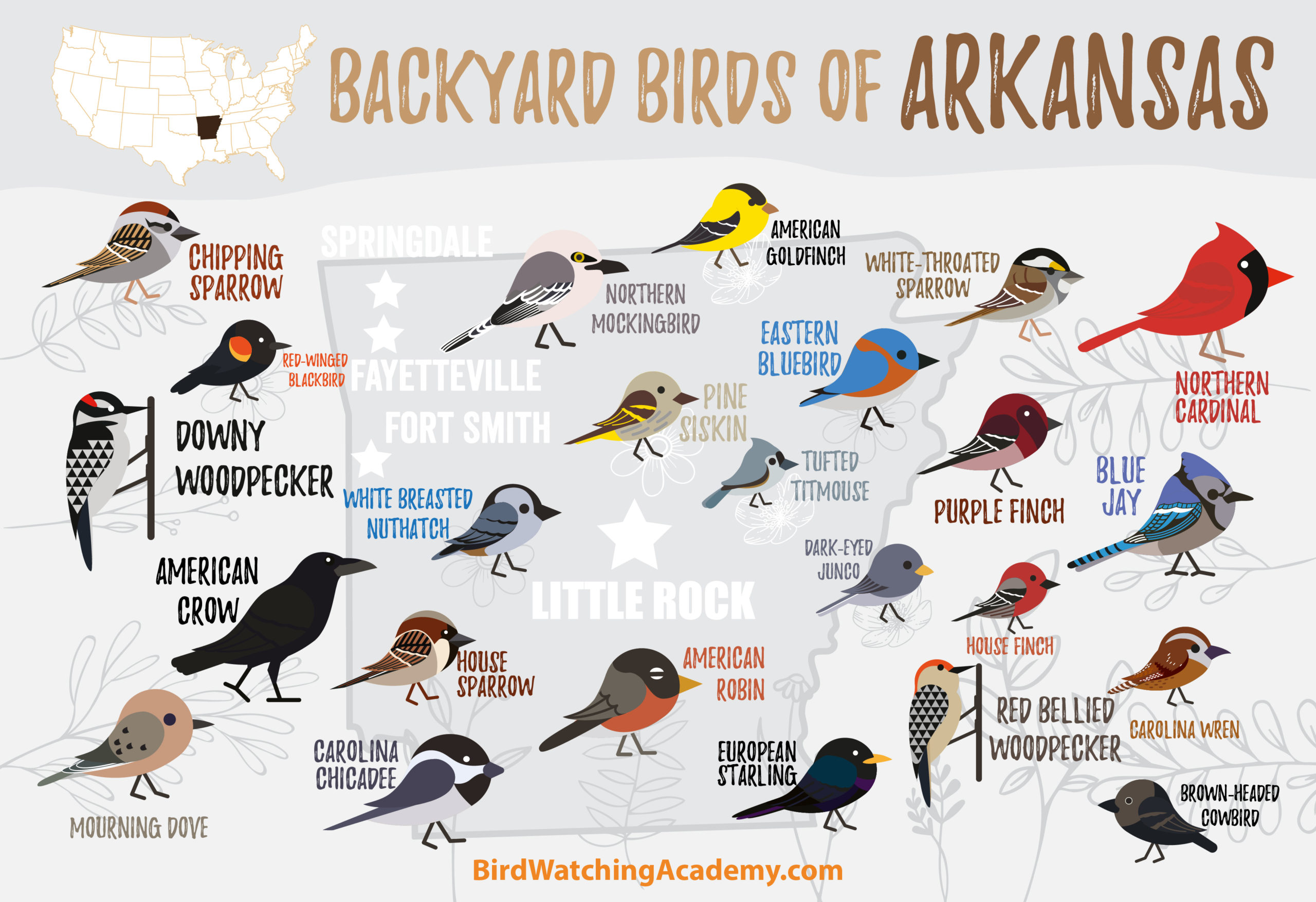 Arkansas is widely popular because of its wilderness and abundance of parks. It is also recognized for the magnificent mountains, beautiful rivers, and hot springs. All of these things make the perfect habitat for native birds. According to a rough estimate, almost 421 different species of beautiful birds can be seen around the year in Arkansas. The other states adjacent to the border of Arkansas are also home to similar birds.

According to birdwatchers, Northern Cardinal is the most frequently seen bird in the whole of Arkansas, whereas the Ash-throated Flycatcher is the least frequently seen bird in the whole state. In 1929, the state of Arkansas declared Northern Mockingbird as the national bird of the state due to its presence in the area throughout the year irrespective of the season. Here is a list of some of the common birds that you can find in your backyard throughout the year.

Brown-headed Cowbird is commonly referred to as the Molothrus later, in the birdwatcher community. It is fairly medium in size and is commonly present in North America. While being a bird that is focused on migration, its physical features resemble that of normal crows. Brown-headed Cowbird tends to migrate from one place to another based on the availability of food, climatic conditions, and the weather.

These birds are fully black, except for the head and the neck, as these parts are brown. Brown-headed Cowbird’s black plumage gives out a bluish-black color instead of a purely black reflection. Unlike eastern bluebirds, the male and female of this species can be differentiated from one another. The male Brown-headed Cowbird is quite colorful than the female Cowbird. Apart from this, the females have slightly less weight than the male and have fewer wingspans. The male bird is known to generate high-pitched noises to attract the female birds for mating.

Ruby-throated Hummingbird is of metallic green color, and their underparts are slightly greyish. The wings of these hummingbirds are black, and their bill is quite long. Due to the longevity of their bills, it is easy for them to suck the nectar from flowers. Both of the genders of these birds look alike, but the younger ones don’t possess the ruby color. It is an incredibly small bird compared to other birds. Ruby-throated Hummingbirds also rely on eating insects and also visit the feeders for drinking sugared water.

American Robin, which has gain popularity as Turdus migratorius, is a red and black colored melody singing bird. The bird is known for migrating to different states of America. According to the birdwatchers, these robins are somewhat similar to the European Robin when it comes to size and shape. Still, due to their presence in America, these are referred to as American Robin. The male American Robin is quite different from that female American Robin, as the male species reflects more color than a female robin. Apart from this, the male American Robin has bright colors while their female counterparts have dull colors.

The European Starling is a common bird that is native to Arkansas and is also referred to as Sturnus vulgaris. It is considerably smaller in size and belongs to the starling species. European Starlings boast about its colorful plumage that is visible on its entire body. The size of these birds is 8 inches, while a wingspan of almost 13 inches. European starling boasts about its shiny black color while the upper parts and feathers of these birds have a contrasting black and blue color.

Blue Jay is also referred to as Cyanocitta Cristata. It is found in many parts of America but is native to Arkansas. Blue Jay belongs to the Corvidae family and is comfortable in a woodland environment. These birds mostly breed in the forests. As the name refers, these birds have contrasting blue and white colors. While the wings and back of the Blue Jay are bluish, but the chest is white. Both genders of the Blue Jay look alike. What makes this bird different from the
birds discussed above is that these carry a specific crown on their head.

These birds are clever enough to describe their feelings and moods by using their crown to express emotions. Apart from this, these birds carry a black color line around their throats and are quite fond of eating nuts, soft fruits, insects, and seeds. Their bills are quite strong, which helps them in cracking nuts. Blue Jay breeds in the trees, as the female sits on the eggs while the male bird provides food to her and the younger ones during the whole period. The younger ones stay with their parents for just two months and then fly away.

Summer Tanager is also called Piranga rubra. These are medium in size and are pretty common in Arkansas. These are one of the most beautiful birds and are quite melodious. These birds belong to the bird family of Cardinalidae. These birds look somewhat like Northern Cardinals and some other birds that belong to the same family. Both genders of Summer Tanager have distinct colors. The male Summer Tanagers are quite shiny and reddish, while these males also
boast about a crown that they carry on the top of their heads.

On the other hand, the female Summer Tanagers have quite dull colors and most commonly have a brown plumaged body. Apart from this, these birds also don’t have a crown over their heads. The younger birds of this species also share the same plumage like that of the females. These birds are migrating species and usually migrate towards the south during the winters. Apart from these differences, the female Summer Tanager has orange underparts, and the
upper parts are usually olive-grey.

These birds breed in open wood areas and rely on eating worms and small insects. In addition to that, these birds also eat small grains, seeds, fruits, and berries. It has been noticed that these birds eat mid-air but are also seen eating while sitting on the branches and the ground as well. Summer Tanagers are quite independent and are barely seen visiting the feeders of Arkansas while searching for food.