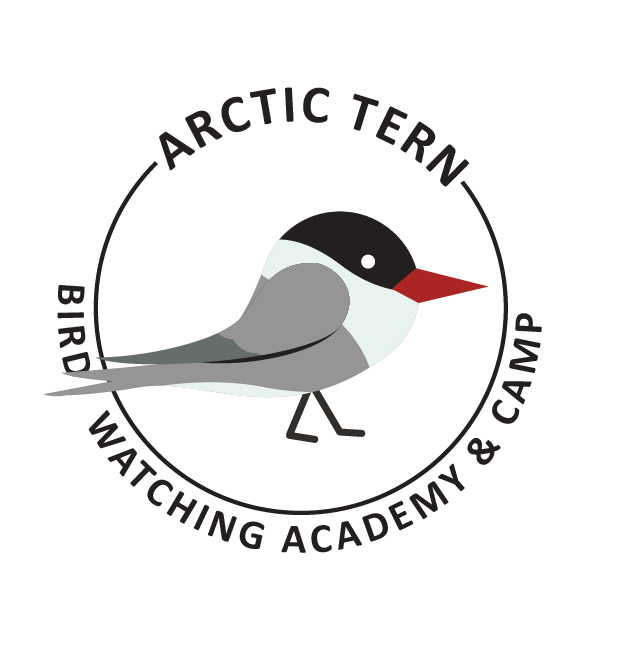 An Arctic Tern is a fun bird to see while bird watching. Below are some tips to help you identify Arctic Terns. We have also put together a list of fun Arctic Tern T-shirts, Arctic Tern bird patches, birdhouses, bird feeders, binoculars, stickers, and other fun bird-watching items.

The Arctic Tern is a grey and white bird with angular wings well known for its breeding grounds in the Arctic. It migrates yearlong from the Arctic Circle to Antarctica where it enjoys the long summer days. During breeding, the birds get a black cap on their heads, red legs, and bills.

A small, slender grey-and-white bird with angular wings and a long forked tail. They have a full black cap that extends down the back of the neck, a grey belly,  a red bill, and red legs. The black mantle is 305 millimeters, and the scapulae are fringed brown, some tipped white. Nonbreeding birds have a white forehead with a smaller black cap restricted to the back of the head and neck. Non Breeders also have a black bill, black legs, and a dark grey bar across the shoulder, shorter legs, and a slender tern. The upper wing is grey with a white leading edge, and the collar is completely white, as is the rump. The deeply forked tail is whitish, with grey outer webs. Arctic Terns are medium-sized birds. They have a length of 28–39 centimeters and a wingspan of 65–75 centimeters

Breeding Arctic Terns are pale grey on both their upperparts and undersides. They develop a black cap running down its neck and a red bill and red legs. Non-breeding Terns have white foreheads with a smaller cap, and black bills, and black legs.

Arctic Terns are slender with pointed wingtips and small rounded heads with a steep forehead. Both sexes are a length of 28-39 centimeters. They weigh 90-120 grams and have a wingspan between 65 and 75 centimeters.

The Arctic Tern is a graceful flier that hovers over its feeding grounds and nest colonies. They hunt on small fish swimming close to the water surface diving into a 20-inch dive and comes out swallowing the fish head first. Males fly lower over their colonies with their bills filled with fish in order to capture the attention of a female. Females who are interested in turn fly after the male flying over him with her straight body. The courtship continues as the male offers food to the female, feeding her as they bond.

The Arctic Terns are carnivores and their diet includes fish, crustaceans, and insects. The diet varies with season and location, the diet mostly includes small fish, crustaceans, and insects in summer on breeding grounds. They are also known to eat mollusks, marine worms, earthworms and sometimes they are known to eat berries. Then they plunge into the water to scoop up the prey, which they can even eat while gliding.

Arctic Terns feed mostly on small fish and occasionally insects from the air or water surface. During their extensive migration, they forage with other seabirds following predator schools of fish that force the smaller fish to swim close to the water surface.

Arctic Terns breed across the Arctic in treeless areas with little to no vegetation, in open boreal forests, and on islands and barrier beaches on the northeastern Atlantic Coast. They migrate over the Atlantic and Pacific Oceans to food-rich waters around Antarctica where they hang out on pack ice during the Southern Hemisphere’s summer.

Their breeding grounds are mostly treeless with no ground cover or beaches along the north Atlantic Coast. Their migration is usually offshore but some travel overland.

They first breed at the age of 3-4 years. They nest in colonies, sometimes with other terns. Much of courtship between the sexes are aerial, with groups and pairs performing high flights. The male may fly over the colony carrying fish, wings beating high above back. On the ground, a pair of birds posture, bow, strut in circles. Male presents fish to female. The nest site is on the ground in the open. The nest is built by both sexes and is a shallow scrape, usually lined with a few bits of plant material, debris. The young leave the nest 1-3 days after hatching and find a place to hide nearby. Both parents bring food to the young.  The young hatchling takes its first flight 21-28 days. The young remain with parents another 1-2 months.

Arctic Terns migrate from pole to pole, birds in North America travel around 25,000 miles each year. They fly at about 35 to 40 kph. It spends much of its time resting on small blocks of ice. it flies from its Arctic breeding grounds to the Antarctic and back again each year. The long journey ensures that this bird sees two summers per year and more daylight than any other creature. They start leaving the wintering grounds in March and reach coastal North America during late April with greater numbers passing through in May. Breeds on coasts and tundra from New England, Washington, and Britain north to the northernmost limits of the land, and spends the rest of the year at sea.

The nesting site is usually on the ground surface near water sources. Males and females scrap on the ground of an existing hole or ground on the surface. Female Arctic Terns lay 1 to 3 eggs and incubates them for 23 days. 28 days after hatching the chicks are strong enough to leave the nest.

The Arctic Tern is a great iron-on patch to start your collection with. The patches are durable and can be sewn on or ironed on to just about anything.

Stickers are a great way for you to display your love for bird watching and the Arctic Tern. We sell a monthly subscription sticker pack. The sticker packs have 12 bird stickers. These sticker packs will help your kids learn new birds every month.